Grasslands are a common Biome found in the world. They are generally safe areas with many types of useful resources. The player always spawns in a Grassland upon entry to a world, whether it be a small, zigzagged patch of green or a whole biome. Grasslands often mingle with areas of Forest and occasionally Marsh.

Grasslands are characterized by their green Grass Turf and scattered Evergreens, Grass Tufts, Saplings, Carrots , Flowers, and Berry Bushes. Flint can also be found on the ground occasionally. Beehives and Pig Villages are commonly found on Grassland terrain. Rabbit holes appear sparsely in Grasslands, as do Ponds which spawn Frogs. Butterflies are commonly found here due to the abundant Flowers.

The primary dangers in Grasslands are Spider Dens, which are typically spread out, and Killer Bee Hives, which can sometimes be found in dense formations along with regular Beehives and many Flowers. Walrus Camps are also more likely to spawn here than in any other biome, creating a hazard in Winter.

In Don't Starve Together, the Gigantic Beehive that can be Hammered to spawn the Bee Queen can be found in the Grasslands biome. Juicy Berry Bushes and Twiggy Trees will sometimes replace all Berry Bushes and Saplings respectively in the entire world, including in this biome. 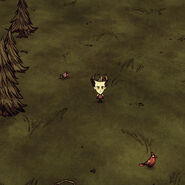 An example of a Grasslands biome.

The player spawns on a piece of Grassland.

Appearance of the biome in the pre-alpha Don't Starve.
Retrieved from "https://dontstarve.fandom.com/wiki/Grasslands?oldid=433146"
Community content is available under CC-BY-SA unless otherwise noted.