“It's a flammable tuft of grass.”

“Has an unusually strong tensile strength.”

“Grass, next best thing to silk.”

“For all your grassy needs.”

“A common ingredient for success around here.”

“Grass that grows from richest earth.”

Grass Tufts are Plants commonly found in Savanna and Grasslands, but they can also appear in other biomes. They can also be found in a few underground biomes, notably the Sunken Forest.

Grass Tufts can be harvested to receive 1 Cut Grass, after which they will need three days to regrow (Rain will reduce this time).

Grass Tufts can be dug up with a Shovel or Regal Shovel and replanted in a new location (typically closer to a base camp). Doing this will give it a shorter, withered appearance, requiring the tuft to be fertilized before it will regrow any new grass. It must be fertilized again after 20 harvests. Grass will not grow during Winter. Grass Tufts can't be planted on Checkerboard Floorings, Wooden Floorings, Cobblestones, Carpeted Floorings, Rocky Turfs, Sandy Turfs, and Cave Rock Turfs, unless it has been planted before these Turfs were placed.

These plants are flammable and can be used as long-lasting fuel in Campfires and Fire Pits, but that is not recommended since Grass Tufts are a nonrenewable resource. When unpicked Grass Tufts are burned, they will leave behind 1 Ash and no plantable tuft. The same applies to dug-up tufts.

Because they burn easily and are usually planted very close together in a large cluster, Grass Tufts are very susceptible to Lightning strikes which occur during heavy Rain. This can be prevented by building Lightning Rods near them.

In the Reign of Giants DLC, Grass Tufts will turn into Withered Grass Tufts (with a similar appearance as those that need fertilization) during Summer. During this condition, Grass Tufts are unharvestable for their Grass, and digging these will yield 1 Cut Grass and no replantable Tuft. A way of curing or preventing these from withering is to simply apply fertilizers or build an Ice Flingomatic nearby.

In the Shipwrecked DLC, Grass Tufts appear greener and can also be found in Mangrove, Beach and Meadow Biome. They will turn into Withered Grass Tufts during Dry Season unless they are growing in Mangrove Biome.

In the Hamlet DLC, Grass Tufts are dropped by Tall Grass dug up by a Shovel. Unless they are planted on Plain, Rainforest, Deep Rainforest or Dense Turf, they will grow into regular Grass Tuft instead of a Tall Grass.

In Don't Starve Together, Grass Tufts are among the resources which can become Diseased. They can be dug up to prevent the disease from spreading to other Grass Tufts and replanted and fertilized to delay it from becoming diseased again. Grass Tufts will sometimes transform into living Grass Gekkos when being picked.

A Grass Tuft in game.

A Savanna with several Grass Tufts, as seen on the Map.

A Grass Tuft in the Shipwrecked DLC.

A picked Grass Tuft in the Shipwrecked DLC.

A dug Grass Tuft in Shipwrecked. 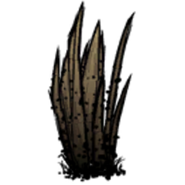 A Diseased Grass Tuft in Don't Starve Together.

A picked Diseased Grass Tuft in Don't Starve Together.
Retrieved from "https://dontstarve.fandom.com/wiki/Grass_Tuft?oldid=468080"
Community content is available under CC-BY-SA unless otherwise noted.