“So that's where the music was coming from.”

“Is box that sings!”

“Shall we have a danse macabre?”

“IT IS A MUSICAL SLAVE.”

“It appears to have no power source.”

“Better than most of the stuff on the radio.”

“We could listen to that forever!”

“I wonder what is in his record collection?”

“A bewitched tune it plays.”

“Is there some kind of dance party going on?”

The Gramaphone (or Phonograph) is a Structure that is seen in the Epilogue of Adventure Mode, nearby Maxwell, who is in the Nightmare Throne. It cannot be destroyed in any way, and it serves no practical function within the game. When Maxwell is first reached, the Gramaphone is playing the Ragtime theme that is used in some update trailers.

A bunch of pieces that appear to be components for the Gramaphone can be found in the game's files, but they cannot be acquired without cheating tools or code trickery and serve no purpose.

In the animated short Taste of Home, Warly is shown to have owned a Gramaphone very similar to the one in-game. It played an odd song before Warly disappeared from the real world.

The Gramaphone next to Maxwell as it appears in-game. 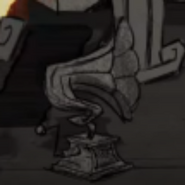 The Gramaphone as seen in the A New Reign cinematic.

A picture of the Gramaphone found on Don't Starve's old website, next to the soundtrack link.

The Gramaphone in a background image from the Taste of Home short.
Retrieved from "https://dontstarve.fandom.com/wiki/Gramaphone?oldid=451908"
Community content is available under CC-BY-SA unless otherwise noted.