Don't Starve Wiki
Register
Don't have an account?
Sign In
Advertisement
in: Mobs, Return of Them, Periodic Threat, Ocean
English

“Geez, look at the nose on that thing!”

“Big fish think it can poke holes in Wolfgang's boat?!”

“I cannot escape its piercing gaze... or horn.”

“DON'T YOU DARE POKE YOUR NOSE AROUND HERE”

“It appears to be a variation of the Monodon monoceros.”

“That thing looks like it could do some damage.”

“Perhaps it could be reasoned with.”

“You a weird looking fish, florp.”

“Unicorns of the sea.”

The Gnarwail is a neutral Mob exclusive to Don't Starve Together, introduced in Return of Them.

Every time a fish school emerges in the Ocean (only Rough or Swell) near player, there is a 7.5% chance that Gnarwail will spawn. When killed, the Gnarwail drops four Raw Fish and one Gnarwail Horn if its horn is not destroyed.

"gnarwail_attack_horn"
Gnarwails are neutral toward players. They are sometimes seen noding.

They regularly chase other Ocean Fishes and eat their meat.

When attacked, they will drill Boats with their Horn, damaging them and creating a leak. When drilling, the Horn can be attacked and destroyed without killing the Gnarwail, dropping one Gnarwail Horn. If a Gnarwail doesn't have a horn, it will attack by jumping into their targets, creating Waves in the ocean. They attack anything that isn't located on a boat with their jump attack only.

Gnarwails can be befriended by giving them Meats. They follow for 25

per day for up to 2.5 days. Follower Gnarwails will regularly toss Items floating in the Ocean towards the player.

When not hunting ocean fish, Gnarwails attack Monsters that come too close, including Cookie Cutters, Malbatrosses, Skittersquids, and Rockjaws with their jump attack.

During night, they sleep unless provoked or already in combat.

Gnarwails will despawn if the player travels far away enough such that they are unloaded from the player's vicinity.

A Gnarwail diving in the Ocean.

A Gnarwail surprising Wilson in promotional art for the Hook, Line, and Inker update.

A Gnarwail featured in a promotional image for the Don't Starve Together QOL update. 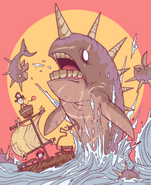 The Gnarwail as seen in a drawing from Art Stream # 96.
Tiếng Việt 中文
Community content is available under CC-BY-SA unless otherwise noted.
Advertisement