“There's a slight humming coming from it.”

“It's softer than I would've thought.”

“This thing will be useful.”

“What a neat trick.”

“It's gushing with light.”

“I find myself strangely attracted to it.”

“Has a certain glow about it.”

“It glows just as much on the way out, lemme tell you.”

“A glowing fruit. I am astute.”

“We definitely don't have these back home.”

A Glow Berry (not to be confused with a Lesser Glow Berry) is the glowing lure of a Depths Worm, dropped as loot upon its death. When eaten, it restores 11

A Glow Berry will also cause any creature that consumes it, including Bunnymen, Pigs, Splumonkeys, Prime Apes and Gobblers, to glow. The intensity of the glowing light decreases over time and will extinguish 90 seconds after consumption. If dropped on the ground, it will glow, similar to a Light Bulb. It emits enough light to prevent an attack from Charlie.

In all DLCs, Glow Berries can be stacked up to 10 in the player's Inventory.

In the Reign of Giants DLC, Glow Berries can be used to craft Moggles. Additionally, they can be used to refuel Moggles, extending their durability by 33%.

In the Hamlet DLC, Glow Berries can be bought for 20 Oincs at 'The Sty' Oddities Emporium.

In Don't Starve Together, the glow will last longer than in Don't Starve: for a total of 240 seconds after consumption. Warly can use Glow Berries to make Glow Berry Mousse in the Portable Crock Pot.

A Glow Berry left on the ground, emitting enough light to prevent Charlie from attacking the player.

A Bunnyman after eating a Glow Berry. 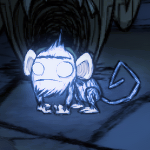 A Splumonkey that has eaten a Glow Berry.

While attached to a Depths Worm, the Glow Berry only glows when it's being used as a lure.
Español Polski Tiếng Việt
Community content is available under CC-BY-SA unless otherwise noted.
Advertisement