“A bizarre specimen of the insecta class.”

“Such a complex arrangement of oculus!”

“Do you like flying as much as I do?”

“Check out the peepers on this guy.”

“What thoughts lurk within that curious noggin?”

“Don't be jealous Woby, you'll always be my best friend.”

“Who's a cute little bug thing? You are!”

Glommer is a passive Mob from the Reign of Giants DLC.

When tamed, Glommer provides a Sanity aura of +6.25/min, (only while standing extremely close, similar to befriended Pigs) making it useful in countering the nighttime sanity drain of -5/min. It will also drop Glommer's Goop once every 2–4 days.

Killing Glommer raises the player's Naughtiness by 50 (which is the naughtiness cap), therefore Glommer is the only creature in RoG that will cause Krampus to immediately spawn when killed by the player. (This aspect is replicated in the Shipwrecked DLC, when killing a Doydoy with only 1-2 left in the world, or the Sealnado when in Seal form.)

If killed, Glommer will drop 3 Monster Meat, 1 Glommer's Wings, and 2 Glommer's Goop, and will re-spawn the next full moon. It falls asleep after being hit by 3 Sleep Darts.

Like other followers, Glommer can be targeted by the player while performing a force attack. Below is the number of hits it takes, with a default damage modifier, to kill Glommer. The Weather Pain is not included due to the random nature of its projectile.

Glommer will not be attacked by any variety of Spider or Bee. 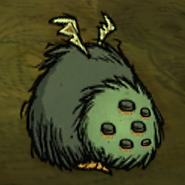 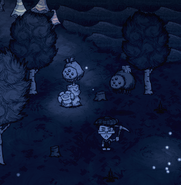 Glommer next to the Glommer Statue during a full moon. 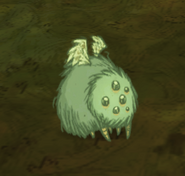 Glommer frozen, but not encased in ice.

Glommer as seen on the Map.

Glommer bouncing up and down when idle.

Glommer as it appears in the trailer for RoG.

Glommer as seen in a drawing from Art Stream # 66.

idle loop down at side