“Dare you guys to smack it with a hammer.”

“Wolfgang's mighty punches do nothing.”

“Dripping with enmity. And honey.”

“Nature is something else, eh?”

“I don't see what all the buzz is about.”

“A hive of winged warriörs.”

“That's almost definitely bigger than before.”

The Gigantic Beehive is a naturally spawning object exclusive to Don't Starve Together, introduced in A New Reign. It can be found in the Grasslands along with other Beehives. It looks similar to a normal beehive, but much larger in size. The Bee Queen resides within, and Hammering it repeatedly will spawn her.

A stream of Honey flows out of the hole near the top, and hammering the Gigantic Beehive will reduce the size of the stream. Each hammering has a 49% chance of dropping 1 Honey and a 1% chance of dropping 1 Honeycomb onto the ground, which can be picked up. Honey can be repeatedly harvested until the stream is gone, without spawning the Bee Queen. Every 120 seconds, the honey stream will grow, and can be hammered again to receive more Honey. Care is to be taken, as hammering too much will spawn the Bee Queen, even when the player has no intention of summoning it.

Wigfrid standing next to a Gigantic Beehive. 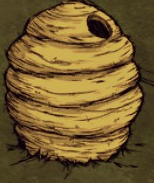 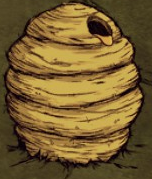 Gigantic Beehive stage 2. Notice the honey starts to drip out. 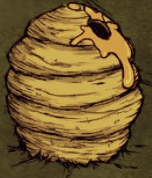 Gigantic Beehive stage 4. The maximum amount of honey that can drip out.

The honeycomb-shaped hole, or Honey Patch, left behind by the destroyed Gigantic Beehive. 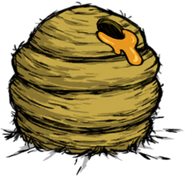 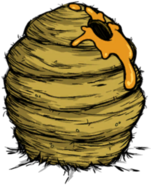 A Gigantic Beehive with maximum honey.

The old version of the Honey Patch.

The Gigantic Beehive, as seen in the A New Reign: Part 2 trailer.
Tiếng Việt
Community content is available under CC-BY-SA unless otherwise noted.
Advertisement