Ghost Players or Ghost Characters appear whenever a player dies in Don't Starve Together. They can fly around and haunt objects. Ghost Players may resurrect themselves via Touch Stones, Meat Effigies, or Life Giving Amulets. Other players are able to resurrect them using a telltale heart. Wanda can also use Second Chance Watch to revive herself and other characters. They also emit just enough light to ward off Charlie.

In Survival Mode, if any players have died and become ghosts, a ghost icon will appear by all other players' Sanity meter and their Sanity will decrease by 3.3/min (0.055/sec) for every ghost. This penalty encourages the resurrection of fallen players. When all players have died and become ghosts, a 120 second timer will begin that will end the game and generate a new world. If a Ghost Player revives (via Touch Stone for example) before the countdown ends, the world will continue.

In Wilderness Mode, the player respawns at a random location on the map after being killed, so ghosts do not appear in this mode.

In Endless Mode, the game will go on even when every player has become a ghost. Ghost Players will be able to revive at the Florid Postern for a maximum Health penalty. In addition, Ghost Players will not drain Sanity in this mode, unlike Survival mode.

Haunting is an action that can only be performed by Ghost Players. It has a variety of different effects, depending on the entity that is being haunted. Examples of haunting objects are moving items around, turning Trees into Treeguards, and turning Flowers into Evil Flowers. After being haunted, an entity cannot be haunted again for a few more seconds. Evil flowers can also be used to create Nightmare Fuel.

Most objects fall into a few categories of haunting effects, most of which are not particularly useful. A few entities have unusual haunt effects, which are often quite useful. Below are lists of known objects that can be haunted.

Inventory items that are not listed only have a chance to be launched a short distance away.

These creatures will panic for a few seconds after being haunted. Panicking involves running around, pausing previous aggro. Some of the following mobs will run away from player ghosts, making them practically impossible to haunt. 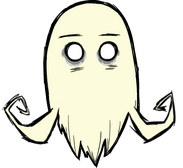 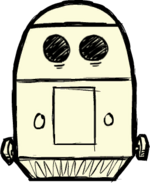 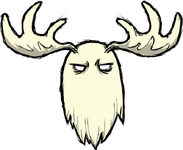 The dialogue box that appears when everyone has died.