“Ooo. What a delightfully wizened look.”

“That there'll make you one with the forest.”

“It possesses a spritely magic.”

“This helm runs flush with the förest's magic!”

“Wearing mushrooms is the next best thing to eating them.”

“I'll have mushroom spores in my horns for days.”

“It's not made of the poisonous kind, right?”

“I don't like the idea of a mushroom growing on my head.”

The Funcap is a craftable item exclusive to Don't Starve Together, introduced in A New Reign. There are three variants, crafted from, and matching, various Mushrooms' colors. They can be crafted after obtaining their Rare Blueprint by either killing the Toadstool or as a random drop from Loot Stash, after killing Klaus, using 6 Mushroom Caps with the same color.

Funcaps can be equipped in the head slot. When worn, they reduce the rate of Hunger loss by 25%, provide 20% Wetness resistance and 60 points of protection from Overheating. They also periodically spawn Mushroom Spores every 60-61 seconds, which can be caught using a Bug Net. Like Garlands, they perish over time whether they are worn or not. They take 6 Days to completely spoil. 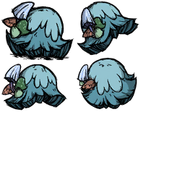 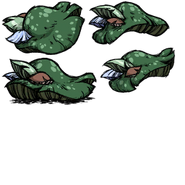 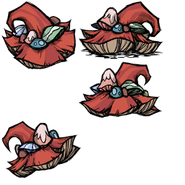 Red Funcap as seen in the poster for the Warts and All update.
Community content is available under CC-BY-SA unless otherwise noted.
Advertisement