Knocks out items from the player's inventory when attacking

“I don't trust anything that can't decide between air and water.”

“It jumps and licks things.”

“A impressive criminal of the animal kingdom!”

“Keep your tongue to yourself, bucko.”

“Sir, you seem to have accidentally stolen my stuff!”

“That doesn't look like the frogs in my handbook...”

Frogs are hostile animals that spawn from green Ponds during the day and occasionally from Tumbleweeds when picked.

Frogs are normally slow-moving, but if the player (or any other mob) gets too close, they will become aggressive and begin to chase at a considerable speed. When a Frog is attacked while there are other Frogs in the vicinity (a radius that extends beyond the player's screen), they will all turn hostile and attack, much like Beefalo will. Frogs attack with their long tongues, dealing 10 damage. A successful hit by their tongue will knock off the player's first item out of the inventory and onto the ground. If there is a stack of the affected items, only one will be knocked out.

At dusk, Frogs will return to their pond, making this an ideal time to fish. They take one blast from the Ice Staff to be frozen and cannot be set on fire but are not immune to fire damage. They drop Frog Legs when killed. Frogs do not spawn in Winter because their ponds are frozen, and they are rarely found in Marshes due to Mosquitoes having their own type of Ponds there.

In the Hamlet-compatible worlds, Frogs can be set on fire. In DST, Frogs are neutral with Wurt as well as other Merms.

Unlike many other small animals, Frogs cannot be stunlocked and will continue attacking their enemy. This means that to kill a Frog without taking damage, the player must run in, attack, and run out again quickly while the Frog attacks, known as kiting. It is best to attack a Frog while it is still recovering in its tongue lashing animation (attack), and run back. However, be aware that when multiple Frog Ponds are present an often overwhelming number of Frogs will give chase after attacking one of them. Frogs can see when their brethren are being attacked from more than half a screen away (so they can chase the player from off screen). After fleeing from the Frogs for a large enough distance, the Frogs will lose interest and hop back to their pond(s).

The safest method is to build a wall enclosing at least a single pond. The size of the area would be at least four by four berry bushes. Then a player can trap a Rock Lobster inside a wall (preferably stone) and close the entrance so that it cannot walk away. Frogs will attack the Rock Lobster during the daytime, which will defend itself, killing the Frogs. The player can loot the Frog legs afterward.

An alternative - and far safer - hunting method involves using a Trap; placing the trap on the ground between the Frog and the character will cause the animal to hop into it when trying to attack, killing it and producing Frog Legs when the trap is picked up. A quick and aggressive trick with a trap can be done by dropping it right beside a Frog landing from a hop, then walking back, which will immediately catch it without any retaliation. Frogs will occasionally leap over placed traps.

Another way to hunt Frogs is placing some Pig Houses near the pond and collect loot. This method tends to yield fewer Frog legs because the Pigs will eat them, but it will yield extra Pig Skins and Meats if the number of Frogs is high enough.

Frogs will only take a single item from the character's first slot, so a good strategy is to put a stack of something that isn't too useful (e.g. rot) in the first inventory slot. The player won't have to worry about losing valuable items when hit by a Frog

Below is the number of hits it takes with each weapon to kill Frogs when playing with characters with a default damage modifier. The Weather Pain is not included due to the random nature of its projectile.

In any Adventure Mode world with Rain, heavy rainfall can rain Frogs. "A Cold Reception" has the most frequent rain and therefore the highest chances of Frog Rain. This can be dangerous, since there is very little area to run once Frogs begin raining. It is easy to be killed by getting close to any of them and having them all become aggressive at once. A Miner Hat is recommended for Night travel as it gives a bigger radius of Light than a Torch, to see Frogs in the area, and it's recommended to be wary of areas with a lot of objects, since there may be Frogs behind them.

Staying near campfires during night is not recommended because the player will not have a large area to flee from the frogs. Try to have one torch for emergency.

Frogs from rain do not despawn, so they must be killed to make them go away. At night, rained Frogs do not go to sleep, but they become idle, standing in place until morning comes.

It is advisable to lead these Frogs to nearby mobs such as Beefalo in heat, Guardian Pigs or Killer Bee Hives (if there are any nearby) to eliminate them for the purpose of looting Frog Legs. However, it is also advisable to take extreme caution since these mobs are also hostile to the player.

In the event that these mobs at a disposable surrounding area is far too hostile to remain productive, an effective strategy is to place regular Traps throughout the base and surrounding area. The Frogs are immediately killed once they get near enough to the Traps.

In the Reign of Giants DLC, Frog Rain can occur in Sandbox Mode as well as Adventure Mode, often accompanying the heavy rain of Spring. The number of Frogs spawned during Frog Rain also increases over time, with a smaller number towards the beginning.

Frog rain in Adventure Mode. The camp and surroundings are inundated with Frogs.

Area with Frog Ponds on the map.

Frog attacking with its tongue.

An example of Frog farming. 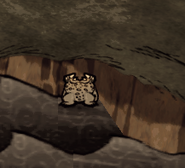 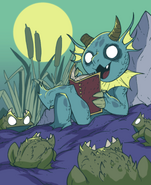 Frogs surrounding Wurt as seen in a drawing from Art Stream # 92. 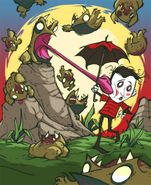 A Frog Rain pouring over Wes as seen in a drawing from Art Stream # 100. 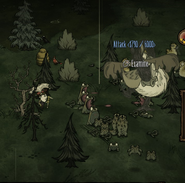 Frogs from a frog rain fighting against a Moose/Goose.
Français Polski Русский 中文
Community content is available under CC-BY-SA unless otherwise noted.
Advertisement