“All dressed up and nowhere to crow.”

“Who would want to scare crows away?”

“THIS STRAW ROBOT IS TERRIBLE”

“Ah, excellent. No more leaving clothes on branches to get wrinkled.”

“He's doing the world a service.”

The Friendly Scarecrow is an exclusive Structure in Don't Starve Together, introduced in A New Reign. It requires a Pumpkin, three Cut Grass, and three Boards to craft and a Science Machine to prototype. Its only function is to greatly reduce the spawn rate of Crows in the area in which it was placed, while greatly increasing the rate of Canaries. If burned down and Hammered, it will drop a Hot Pumpkin, instead of a raw one.

Friendly Scarecrow as seen in the poster for the Warts and All update. 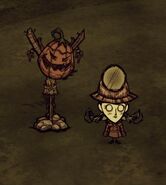 Willow next to a Friendly Scarecrow.

The 13 faces of the Friendly Scarecrow. 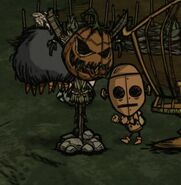 WX-78 dancing next to a Friendly Scarecrow.

A burnt Friendly Scarecrow.
Retrieved from "https://dontstarve.fandom.com/wiki/Friendly_Scarecrow?oldid=451229"
Community content is available under CC-BY-SA unless otherwise noted.