“This ought to be a scientific impossibility.”

“The vines coil away from my lighter... weird!”

“Why door not crumble under mighty Wolfgang punches?!”

“Its beauty is tinged with a heartbreaking sadness.”

“I CANNOT MAKE IT WORK”

“Hmm... This may require further reading.”

“That'd be the thing I fell through, eh.”

“Always did have a flair for the dramatic...”

“It makes me löng för the stage!”

“Is anyone else coming for dinner?”

“That was a one-way ticket.”

“Scale-less say this what brought them here?”

“Parts of this mechanism look... familiar...”

The Florid Postern is a naturally spawning Structure in Endless and Survival modes in Don't Starve Together. It is a portal that marks the spawn point for a server. If the server is set to Endless Mode, it can be used by a dead player to resurrect at a cost of 25% of their maximum Health (this penalty can be reversed with use of Booster Shots).

The Florid Postern can be converted into the Celestial Portal using a Portal Paraphernalia and constructed using 20 Moon Rocks and a Purple Moonlens.

When a new world is generated, one Florid Postern is created in the overworld and the caves (if it's enabled). It remains stationary throughout the game. When a new player joins the server, the open space of the portal will light up slowly and then fade back to normal, revealing the new player. All players will spawn from the portal that was generated during the start of a new world. If a new player spawns during dusk or night, the portal will create a small circle of light (about the same radius as a medium Campfire) that lasts until daytime, to prevent death by darkness. 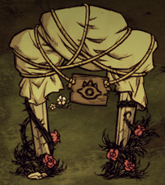 The Portal Paraphernalia has been placed on the Postern to start construction on upgrading it to the Celestial Portal.

The Mark of Charlie's new reign, destroying the Jury-Rigged Portal and replacing it with the Florid Postern.

The Florid Postern as seen in the A New Reign trailer.

The Florid Postern as seen in a variant of the background wallpaper for a Don't Starve Mega Pack promotional image.

The Florid Postern as seen in a drawing from Art Stream # 40.

Florid Postern in a promotional poster for the release of Don't Starve Together.