"knightboat"
“Get off the water you maniac!”

The Floaty Boaty Knight is a hostile Mob in the Shipwrecked DLC.

It is the aquatic version of the Clockwork Knight, and currently the only mob who drops Gears in Shipwrecked. 3 of them can be found near the Wooden Platform Thing similar to the Wooden Thing in Don't Starve, but 1 to 3 may also spawn wherever the player has killed any sea life.

As the Knights are basically boats, their attack is ranged. They shoot three shots of a Boat Cannon out of their heads in the direction of the player. Their aim is imprecise and shadows indicate where the projectiles will land so the player shouldn't have a problem avoiding them.

Besides guarding the Wooden Platform Thing, Floaty Boaty Knights also act as a navy of sorts, investigating creatures killed on the Ocean. Investigations start at the beginning of the game first, then are restarted when the Knights spawn from an investigation. Each investigation starts with a default time until spawn, ranging from 15 to 20 days at the beginning of the game, shortening over time to a minimum of 5 to 6 days. Every time the player kills any sea life, a potential location for the Knights to spawn is recorded, unless there is another potential location within about 2 screens away. In addition to potentially creating a new potential spawn location, the time to spawn the Knights is also reduced a number of seconds equal to the 1/10th of the maximum Health of the killed creature. Only the kills player has directly caused are counted, kills by other Mobs (including Abigail) or kills due to fire, poison or other environment effects do not count.

Once the investigation timer is up, the spawn points are activated. The next time the player wanders in the vicinity of one or more of the recorded spawn points, a number of Knights based on the amount of time spent in that world will be spawned. When Knights are spawned, all known spawn points are deactivated and removed, and a new investigation begins with the new default time to spawn, which will start tracking all the locations the player kills new sea life after that moment. If the player did not kill any sea life before the timer is up, the next kill will create an active spawn point, which will immediately spawn Knights when the player wanders away and back to the location of the kill.

Previously spawned Knights won't despawn when new ones spawn. The Knights won't respawn at a location of a previous kill, unless new sea life has been killed at that location again.

Boat Knights will always avoid staying in melee range to the player, constantly running away if approached. But their movement speed is quite low, so the player should be able to catch up with them without any problems.

Once they are in optimal range, they will begin to launch their cannon salvos.

Below is the number of hits it takes with each weapon to kill a Floaty Boaty Knight when playing with characters with a default damage modifier. The Weather Pain is not included due to the random nature of its projectile.

It takes 2 blasts to freeze a Floaty Boaty Knight with an Ice Staff and it takes 3 Sleep Darts to put it to sleep.

Floaty Boaty Knights only have ranged attacks, which can be predicted easily, so a player should have no trouble closing in on them. The Knight is unable to hit a target too close to them, and as such, will fall easily to a persistent player. 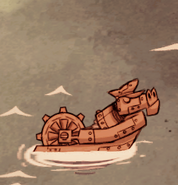 A sleeping Floaty Boaty Knight.
Add a photo to this gallery
Retrieved from "https://dontstarve.fandom.com/wiki/Floaty_Boaty_Knight?oldid=293122"
Community content is available under CC-BY-SA unless otherwise noted.