Allows the player to catch Fish and Trinkets.

“Fishing for the answer with a hook, line and sinker.”

“Is for get fishy from pond place.”

“With this, I can yank the fishies out of their precious safe pond.”

“I've read all about fishing. It should be a snap.”

“I should spend some time at the lake.”

“I will eat for a lifetime.”

“An elementary tool. Yet a very useful one.”

“Have rod, will travel.”

“I believe I prefer the fish market.”

“Amazing what you can make with a stick and some spider webs.”

“It's a fishing rod, you use it for fishing.”

“I don't know if I'm patient enough to be a fisherwoman...”

A Fishing Rod is a Survival Item used to catch Fish or Eels at a Pond. It requires 2 Twigs and 2 Silk to craft and a Science Machine to prototype. The Fishing Rod can be used to catch up to 9 fish/eels before breaking. Fishing does not count towards Naughtiness, so the player is in no danger from Krampus.

The Fishing Rod can also be used to catch Flotsam from the coast, which returns various resources and Trinkets. This action also degrades the Fishing Rod.

Ponds can be found in any part of the map, but they are most common in Marshes, Forests, and Grasslands. To begin fishing, drag and drop the Fishing Rod on the pond or equip the rod and click the pond, and the character will cast a line into the pond. After 5–40 seconds, the line will tug and the "Hook" option will appear. Clicking the left mouse button on the pond will hook the fish, and an additional click will reel it in.

If the player does not reel the fish in shortly after "Reel in" appears after "Hook", the fish will escape and the Fishing Rod will be lost. The player can stop fishing any time by walking away or clicking the pond again.

The time required for the fish to bite depends on the amount of fish remaining in the pond. It will require a minimum of 5 seconds when the pond has maximum amount of fish. As more fish are caught, the time will increase to 5 + 35 * (percentage of the pond fished). For example, if half of the fish in a pond are caught, the next fish will take 22.5 seconds to bite. Fish respawn in ponds over time. After the last fish has been caught, any fishing attempts started before a new fish spawns will never catch a fish. In other words, there must be at least one fish remaining when the fishing is started for any fish to be caught.

In the Shipwrecked DLC, Shoals and Tidal Pools can also be fished. Both yield Tropical Fish, though Shoals have a chance of additionally spawning Crocodogs.

In the Hamlet DLC, Fishing Rods can be used to retrieve sunken Lost Relics in the Lily Pond Biome. They can be bought for ten Oincs in the Pigg and Pigglet's General Store in the Pig City.

In Don't Starve Together, the Lake at the Oasis can also be fished, yielding Fish or Crumpled Packages which contain Trinkets and rare Blueprints. To go fishing in the ocean, a Sea Fishing Rod is needed instead of a normal one. Attempting to fish in the ocean will result in a unique character quote.

In The Gorge event, Fishing Rods can be bought from Billy for 3 Old Coins each. They are used to catch Salmon from Salt Ponds. Unlike in normal gameplay, Fishing Rods in The Gorge do not have a limited durability and can be used an infinite amount of times.

The Fish took the bait.

The Fish is hooked and ready to get reeled in. 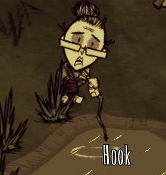 Wickerbottom getting a bite while fishing, with the "Hook" prompt. 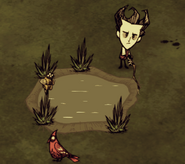 The lure is in the ground rather than the water.
Polski Русский Tiếng Việt
Community content is available under CC-BY-SA unless otherwise noted.
Advertisement