Don't Starve Wiki
Register
Don't have an account?
Sign In
Advertisement
in: Items, Structures, Craftable Items, Return of Them
English

Can be placed as a Structure.

“It puts out fires very a-fish-iently.”

“This thing's broken, it spouts water instead of fire!”

“The fish is paying for its transgressions.”

“It's a shame wood has to be so flammable.”

“Higgsbury, I think a bucket would have sufficed...”

“We hath safeguarded öur vessel against a fiery end.”

“Fires on a ship are not to be taken lightly.”

“Why do I get the feeling this is that funny-haired scientist's handiwork...”

“This will put a swift end to fiery pranks...”

“It's always good to have proper safety precautions in place.”

“I'm sure I'll be needing it soon enough.”

The Fire Pump is a craftable Item exclusive to Don't Starve Together introduced in Return of Them. It is found in the Seafaring Tab and requires 2 Boards and 1 Spittlefish to craft and a Think Tank to prototype.

The Fire Pump item can be deployed on a Boat. When operated by a player, it spreads water bubbles within a radius of 7.5 to extinguish Fires and smoldering objects. However, it must be aimed below the sea to properly use it. 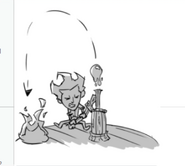