Fire is a commonly-occurring game mechanic.

Fire is very important for various reasons. Primarily, it is used to provide light at Night, which prevents Charlie from attacking. Additionally, fire allows food to be cooked, increasing its Hunger and Health values. Fire also provides warmth during Winter, which counteracts freezing. Despite these benefits however, fire can also be dangerous, as being too close to one will drain Health.

Flaming items or objects may have different descriptions than non-burning ones; for example, a burning log versus one that's just sitting there.

There are several sources of fire which provide light. Most of these can be found in the Light Tab, represented by the Campfire icon. These sources include Campfires, Fire Pits, Torches, or Stars. Additionally, anything actually on fire, such as Plants or Flammable Objects, will give off light as long as they are burning.

Light serves several purposes: mainly it is used to see at night, though it is also needed to prevent Charlie from attacking. Additionally, light prevents the large Sanity loss from being in total darkness (however, it does not prevent the gradual loss caused by Dusk/Night time). If Sanity does drop too low, Night Hands will begin to approach the fire and extinguish portions of it; eventually they may put it out completely. These hands can be scared off by stepping on them and running them towards the edge of the fire's light.


Fire Pits, Campfires, or Stars can be used to cook foods. Cooking has various positive effects. For most foods, the amount of Hunger they restore is increased and a small Health boost is added. Eating raw Meats decreases Sanity, while cooked meats do not. Additionally, Monster Meat, eaten raw, will reduce Health and Sanity, but these effects are lessened with cooking.


In Winter, characters will begin to freeze if they are away from fire for too long (warm clothing helps prevent this). As long as the character is within a certain radius of a fire, they will stay warm. This includes any burning objects like trees. Fires can also warm Thermal Stones, which can be carried around to slow down freezing.

Objects, items, and Mobs that are on fire can cause 8-12

damage per second if they are too close to the player. Most mobs will also take fire damage, when on fire, or when they are close to open fires, which can be used as an offensive tactic.

The following are immune to fire damage/being set on fire:


Uncontained fires can spread to nearby flammable objects, and can quickly get out of control. If mobs are set on fire, either by open fire sources, or by items like Fire Staff, the fire will spread even faster and will be harder to control as the mobs on fire will run around, spreading the fire on everything flammable around them. However, the Ice Staff can extinguish the smoldering phase of either a mob or an object, as well as when the object is burning. When not extinguished on time, huge chain reaction fires can begin, destroying vast amounts of resources depending on location. Campfires (but not Fire Pits) are also considered uncontained fires and will spread to nearby flammable objects if they are too close.

Any flammable item that can be picked up will turn to Ashes if set on fire, while burnt trees such as Evergreens and Mushtrees will yield Charcoal. Structures that have been burnt will return 1/4th of their materials when hammered.

Torches and Fire Staffs can be used to purposely set things on fire by clicking the item on the object or clicking the object with the item equipped. It is also possible to light items in the inventory on fire by dragging a Torch over it and pressing RMB (Right Mouse Button). Most mobs can also be set on fire using Fire Darts.

Red Hounds will combust upon death, spreading fire on the spot that can destroy nearby objects and damage the player. The Red Hound's flames will disappear after a few seconds and yield Ashes.

Lightning strikes will create fires as well, unless they are absorbed by a Lightning Rod.

In Rain, fuel burns faster (depending on precipitation rate):

In all DLCs, Wetness causes fuel items to become waterlogged. Waterlogged fuel burns for only 75% of the time of dry fuel. This effect also apply to a variety of special fuels used on certain equipment, such as Nightmare Fuel, Light Bulb, Glow Berry and Lesser Glow Berry.

More objects are flammable in DLCs and fire can be put out by some fertilizers and Ice.

In the Reign of Giants DLC, the Summer heat can cause things to smolder and ignite. Building an Ice Flingomatic will put out small fires and prevent smoldering objects from combusting. Players can also put out smoldering objects using their hands at the cost of Health, or through some fertilizers, Ice, Luxury Fan or an Ice Staff. Dragonfly is the Summer seasonal Boss, who can create fires.

Dragoon Eggs falling during Volcanic Eruptions can start fires, as well as the Dragoons that spawn from intact eggs after the eruption and from Dragoon Dens in the Volcano. Dry Season, which is the equivalent to Summer in Reign of Giants, does not contain combustion. Shipwrecked also introduces two new mechanics: Strong Winds, which can cause fires to quickly dim and extinguish, and Flooding, which prevents lighting both fire pits and camp fires. Chimineas protect against both mechanics.

In the Hamlet DLC, two new sources of fire were added, Crumbling Brazier and Wall Brazier. Both of them behave near-identically to Campfires, as they can be fueled to provide Light and a means of cooking Food and they may also set nearby flammable objects on fire. Hamlet also introduces a new mechanics: Heavy Fog, which can cause fires to burn as 60% fast as in Rain.

Don't Starve Together contains the changes from the Reign of Giants DLC. Additionally, the Lavae can start fires, while Scaled Flooring slows the spreading of fire.

When Willow fuels a fire, it is 50% more efficient compared to other characters.

Some new tools added in Don't Starve Together like the Watering Can and the Fire Pump can be used to put out fire.

The following are some example of fuel items added in Don't Starve Together:

Willow lighting a Forest on fire.

Flames that appear on the screen when the player is taking damage or about to.

A Treeguard set on fire by burning trees.

How easily a fire spreads in a Forest.

A Red Hound that has "combusted". 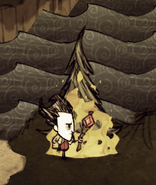 An Evergreen set on fire by a Fire Staff.

Webber taking fire damage after extinguishing a Berry Bush in a Reign of Giants-enabled world. 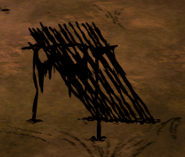 Siesta Lean-to burnt from the heat in Reign of Giants.
Español
Community content is available under CC-BY-SA unless otherwise noted.
Advertisement