Sets anything near it on fire after standing around it for a while.
Provides light, heat and allows food to be cooked.

“A spark of life illuminating the darkness.”

“You're not a hellbeast, are you? Nooo. Just misunderstood!”

“She's a fiery little one.”

“What a happy wyrm you are.”

“She give warm cuddles.”

“You're the best grub in the whole wide world!”

Lavae eat Ashes and Charcoal and will starve if they don't eat enough. If a Lavae gets very hungry it will set things on fire on its own so it can eat, ignoring the player. Like Smallbirds, Lavae will starve to death (after 2 days, or 16 real minutes) if they can't find anything to eat, so it must be constantly fed. Ashes and Charcoal both restore 18.75% each (6 clock segments, or 3 real minutes) of Lavae's hunger.

If a Lavae is frozen, it will turn into a rock and die after a while unless it is hit. It takes 3 hits from the Ice Staff to be frozen. Upon death, Lavae's Tooth will turn to Ashes. The Lavae will then become a Chilled Lavae. 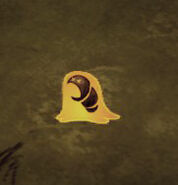 A hungry Lavae burning Seeds to eat its Ashes. 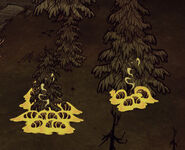 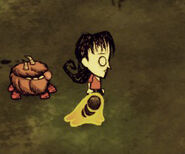 A Lavae nuzzling the player. 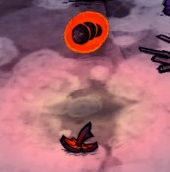 A happy Lavae bouncing around.

The difference in size between the Extra-Adorable Lavae (left) and the enemy Lavae (right).

Sleeping Lavae with its Lavae Tooth. 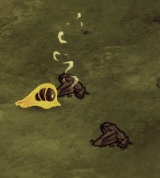