“What a crusty looking animal.”

“Look so friendly and cuddly.”

“I should put it out of its misery.”

“AT LEAST IT HAS METAL COVERING IT”

“Ovis chalybs, and a right mean looking one at that.”

“Reminds me of momma!”

“Ornery and tough as nails.”

“A harsh and phlegmatic creature.”

“Höw much meat is hiding under there?”

“Maybe it just needs a cuddle!”

“I do enjoy a good mutton.”

“I'm sure he has a winning personality.”

“He not look comfortable, florp.”

“I bet you're really a big softie!”

The Ewecus is an aggressive Mob that has a chance to spawn at the end of a series of Suspicious Dirt Piles. It utilizes the same increased chance of spawning as a Varg does, starting off at 5% on Day 1 and gradually increasing to 33% by Day 100 (these values will be halved for finding the Ewecus specifically). This makes hunting for Koalefants increasingly risky.

Upon death, the Ewecus drops 4 Meat, 2-3 Steel Wool and 1-2 Phlegm. It takes 3 blasts from the Ice Staff to be frozen and 3 Sleep Darts to be put to sleep.

The Ewecus has a short-ranged melee attack and a long-ranged projectile. When it uses its short-ranged attack, it will attempt to kite the player. The projectile attack, in which it spits mucus at the player, will halt the player's movement on impact, similar to being frozen solid in the Reign of Giants DLC. The player will escape over time, but the player can escape faster with the help of befriended Pigs, Bunnymen, Mants

, which will free the stuck player immediately. In Don't Starve Together, this can also be done by other players.

The strategy for fighting this is to either use darts or a group of pig or player allies. It cannot be effectively kited solo.

Below is the number of hits it takes with each weapon to kill Ewecus when playing with characters with a default damage modifier. The Weather Pain is not included due to the random nature of its projectile. 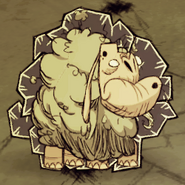 Wilson trapped by the projectile attack.

The projectile attack on the ground. 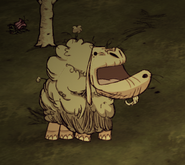 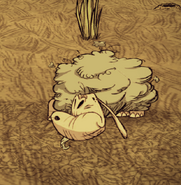 An Ewecus on the Stuck in the Middle with Ewe update poster.

An Ewecus as seen in a drawing from Art Stream # 16.
Español Français Polski
Community content is available under CC-BY-SA unless otherwise noted.
Advertisement