“Yet another instrument I would very much like to bring back with me.”

“If I play it out the other end does it make it not rain?”

The Dripple Pipes is a craftable musical instrument introduced in the Shipwrecked DLC. It can be found in the Magic Tab. It requires a Piratihatitator to prototype, and can be crafted using 1 Horn, 2 Nightmare Fuel, and 1 Rope. It has 5 uses. When used, it creates a light Rain for a half-day (4 minutes), unless it is Winter, in which it will create a light Snow instead.

The Dripple Pipes will not function if used in Caves or Ruins.

In the Hamlet DLC, the Dripple Pipes crafting recipe is unavailable, however, a Blueprint for it can be bought with 100 Oincs from The Tinkerer's Tower. The Horn is available at 'The Sty' Oddities Emporium. 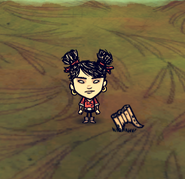