“A bunch of hotheads live there.”

“Could use a little tidying up.”

“I see no reason to disturb them.”

“Fascinating! This creature assumes himself to be some kind of strongman.”

“A berserker has tö live sömewhere.”

“COME NOT 'TWEEN THE DRAGOON AND ITS WEIGHTS”

“Obviously the home of an athletic dynamo.”

Dragoon Dens are naturally spawning Structures introduced in the Shipwrecked DLC. They are found inside the Volcano and spawn Dragoons. They can also be crafted, requiring 1 Dragoon Heart, 5 Rocks and 4 Obsidian to craft and an Alchemy Engine to prototype. Dragoon Dens cannot be Hammered, but they can be deconstructed using explosives, such as Gunpowder, Coconades or Slurtle Slime. It takes 2, 1, and 14 of each, respectively, to deconstruct a Den. Note that if using Slurtle Slime, it must be placed around the Den in 14 separate stacks.

They can house 3 to 4 Dragoons at a time. During the Day, one will leave the Den every 30 seconds, returning at Dusk. If a Dragoon dies, it takes 2 minutes for the Den to regenerate it. 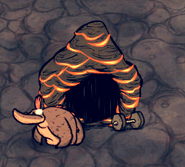 A Dragoon spawning from its Den.
Français
Community content is available under CC-BY-SA unless otherwise noted.
Advertisement