Eats everything except its own eggs. (adult)
Eats seeds and vegetables. (teen)
Eats seeds. (baby)

“I feel oddly protective of this dumb bird.”

“There is no spark behind its eyes.”

“This bird seems too stupid to be alive.”

“What a fascinating species!”

“Not too sure how this awful thing survives.”

“This sad creature has no hope of survival.”

“What a ludicrously doltish bird!”

“Nothing behind the eyes...”

“I see potential in this poultry.”

“I waited my whole life to see a bird like that. It wasn't worth the wait.”

A Doydoy is a passive Mob in Don't Starve: Shipwrecked. It appears as a large blue and green colored bird. It drops Meat, Drumsticks, and Doydoy Feathers when killed.

World generation places two Doydoys in the world, usually on separate islands. These islands are usually mostly jungle, but contain a rounded beach section with some withered Grass Tufts and Saplings. In order to produce a Doydoy flock, they must be picked up and brought to the same location. It is not recommended to kill them before they have been bred, as doing so will prevent obtaining more than 4 Doydoy Feathers, and limit access to other resources they drop.

Doydoys dropped in the Ocean will sink and die.

It also has a tendency to eat nearly everything; it will eat food from Farms and Berry Bushes, out of Crock Pots, from the ground. It even eats Gems and Rocks whilst the only edible items they do not eat are their own eggs. It also has a mating call, allowing it to mate with other Doydoys to produce a Doydoy Nest. Looting a Doydoy Nest gives a Doydoy Egg which can be cooked. Hatched Doydoys have an age cycle, similar to Tallbirds, including a baby stage and a teen stage. When attacked, it does not attempt to flee from the player, instead acting as if the player does not exist at all.

Killer Bees and Spiders ignore Doydoys completely even when entering a Spider Den's sticky webbing. However, Snakes, Dragoons and Crocodogs do attack Doydoys. To maximize the chance of keeping Doydoys alive, they should be kept away from these Mobs. Doydoys take 1 blast from the Ice Staff to be frozen and 1 Sleep Dart to be put to sleep.

Every 2–3 days, the world attempts to pair two Doydoys, causing them to mate. If no Doydoys are close to each other, or there are already 20 Doydoys in the world, then no mating occurs.

Mating involves a ten-second dance, in which the male will start to scream, alerting nearby players, after which the Nest is made. If left alone, the egg hatches from the nest after two days, producing a Baby Doydoy, which only eats seeds. After two days, the Baby Doydoy will grow into a Teen Doydoy, which also eats vegetables. After only one day as a teen, the Doydoy will grow to an adult and be able to eat anything.

When two Doydoys mate, there is a 20% chance for a single Doydoy Feather to drop.

The amount of Naughtiness given by killing a Doydoy varies greatly depending on how many Doydoys remain. Note that nests with eggs in them count towards the Doydoy population. 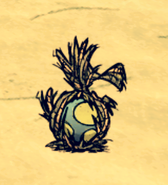 Three stages of a Doydoy.

A glitched Doydoy walking on the Ocean.

Doydoy as seen in promotional poster for the Shipwrecked.

Doydoy as seen in the poster for the Eye of the Tiger Shark update.