Don't Starve Together is a spin-off game of Don't Starve, and features the requested multiplayer mechanics. It was originally scheduled to come out in Summer 2014,[1] though a specific date was not given. However, sign-ups for a limited-access, closed Beta were released. It came out on Mac and Linux after being finalized on Windows.

Survival is the default mode. It is intended to be a cooperative, more difficult mode, in which dead players become Ghost Characters that drain the sanity of living players by 3.3/min for each ghost, up to a maximum of 10/min. Each player death will incur a maximum-health penalty, unless a Touch Stone, Life Giving Amulet, or Meat Effigy is used for resurrection. Maximum-health penalties can be cured by using Booster Shots. When all players are dead, a 120-second timer starts, and if no players are revived in that time, the world resets.

Wilderness mode spawns players in random locations across the map. Players who die are returned to the character select screen, allowing them to respawn in a new random location as a new character with their map progress wiped. This is the only mode where players can respawn as a different character. No resurrection items exist, including touchstones (although their set pieces with pig heads will still be generated). The world never resets.

Endless mode is intended to be a more relaxed mode that doesn't force players to cooperate. The world never resets, and players may resurrect themselves at the spawn portal when they die, as many times as they wish. However, it is not recommended to keep dying as each resurrection at the portal will cause a reduction to maximum-health, similar to the mechanic of death in Survival mode.


Ghost Players are a new feature that introduces the ability to live after death, although in a downgraded state. Whenever a player dies, a skeleton spawns at their death point. Their inventory is dropped, and they become a ghost. Upon death, WX-78 also loses its upgrades.

Ghosts can Haunt items and structures, possibly setting objects on fire, or affecting them in some other way. A ghost can be resurrected using a Touch Stone, Meat Effigy, Life Giving Amulet, Telltale Heart or the Florid Postern/Celestial Portal. Players may only resurrect through the Florid Postern or Celestial Portal if the server is set to Endless Mode. When the ghost re-spawns, their inventory will be empty and their hunger and sanity are set to the same as resurrection in the base game. Re-spawning with the Telltale Heart or with the Florid Postern Portal will apply a 25% maximum health penalty, on the player, which caps at 75% maximum health points (leaving the player with 25%). The health lost to this penalty can be restored by 25% using a Booster Shot. In Survival Mode, other players will suffer a continuous 3.3/min sanity drain for each ghost (up to 10/min total).

The features marked with * were also introduced to the singleplayer version of Don't Starve.

Don't Starve Together includes almost all content of the base game and the Reign of Giants DLC. Some features from the Shipwrecked and Hamlet DLCs were also introduced over time. Additional, several new entities were added to rebalance characters, giants, and seasonal mechanics for the multiplayer aspect of the game:


A free DLC originally called Through the Ages was announced for Spring 2015, and contains new content specifically made for multiplayer, such as mounting Beefalo using saddles.[2] However, due to complications with implementing Cave biomes, Klei pushed back the release date. After the Caves made their way into DST and the game went out of Early Access, the DLC was once again announced, now under the name A New Reign, and was distributed through an ongoing series of updates[3]. Some of the features that are officially part of the DLC were incorporated into the game via update on December 23, 2015, much earlier than the Beta Launch of the DLC, August 11, 2016.

Don't Starve Together features Caves and Ruins, which must be toggled on via a tab in the Server Creation menu. The Caves and Ruins now share the same map level, since separate servers are required to run a map level.

Due to Gears being a less available resource, WX-78 now starts with 150 health, sanity, and hunger, but each set of gears provide less of an upgrade (still bringing it to 300/400/200 overall after 15 upgrades). 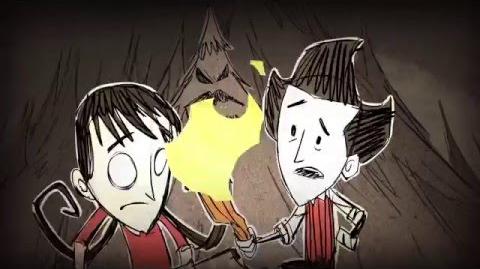 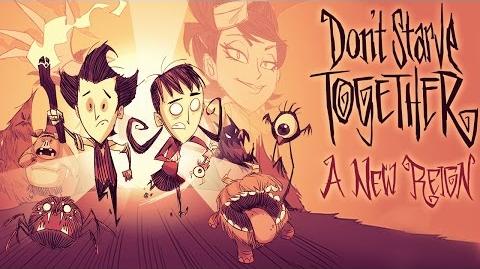 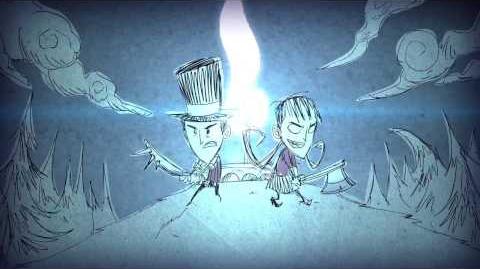 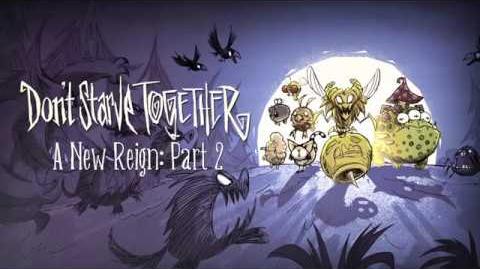 Retrieved from "https://dontstarve.fandom.com/wiki/Don%27t_Starve_Together?oldid=449108"
Community content is available under CC-BY-SA unless otherwise noted.