“It's some kind of homing device.”

“It's full of electrical junk.”

“It is forever seeking its lost half.”

“IT WANTS ITS MOTHER”

“It is a magitechnical homing device.”

“I wonder if it gets the hockey game.”

“I can use this to find my missing parts.”

“What a silly looking device.”

“I'm probably one of the few left that knows how to use these.”

“It will guide me where I wish to go.”

“What this werid box thingy?”

The Divining Rod is a Science item used for locating the Things and Maxwell's Door. It requires 1 Twig, 4 Nightmare Fuel and 1 Gear to craft and an Alchemy Engine to prototype.

The Rod increases in pitch and speed depending how close a Thing or the Door is. It also radiates rings of different colors, again depending on how far away the target item is. In Sandbox Mode, it may take some time to locate Maxwell's Door, as the Rod may find a Thing first. If held during a storm, there is a small chance the Rod can be struck by lightning. For a short time, this will cause the Rod to react as if a Thing or the Door were very close by.

The Divining Rod is also an item that Krampus or Splumonkeys can't steal and Eyeplants will not eat. Also, it can't be taken through Maxwell's Door. If it's one of the items chosen to travel with the player, it will be converted into Ashes after the player uses the Wooden Thing. However, the ingredients can still be taken and it can be remade immediately. 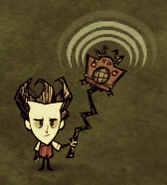 If the rings are white, then the Thing/door is somewhere nearby.

If the rings are yellow, then the Thing/door is closer. 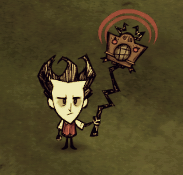 If the rings are red, the Thing/door is very close. 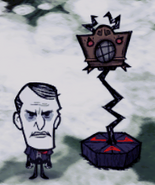 Divining Rod in the holder.

A chart depicting approximate ranges at which the Divining Rod will switch tones, or the character will make a remark.