Hides underground while displaying a glowing lure.
Can't be put to sleep.
Can't be ignited.
Can't be frozen.

“Did not expect this!”

“It comes from the depths.”

“A glorious creature from the depths!”

“A snake beast fröm the depths!”

“You seem angry. Maybe we can talk this out.”

The Depths Worm is a hostile Mob found in Caves and Ruins. The Depths Worms will periodically spawn in Caves or Ruins and attack the player, similar to the periodic hound attacks of the surface.

“Did you feel that?”

“I do NOT wanna see what made that sound!”

“Something nasty intends to rear its head.”

“There is movement under my feet! Fascinating!”

“Did the ground below me just move?”

“Me wooden feet are tremblin' with fright.”

“Now what's all that rumbling about?”

“Was that a tremor?”

“Something approaches from beneath!”

Before an attack, the player will begin to hear rumbling growls which grow more frequent the closer the attack draws. The older a world is, the more frequently attacks will come and the more worms will spawn with each wave.

Depth Worms' spawn delay decreases and the amount of Worms spawned increases as the player survives longer on Default settings.

The highest custom setting for Depth Worms is less dangerous than after day 100 on the Default setting.

When it is not engaged with the player, it will seek out areas with harvestable objects then set its lure and lay in wait, or emerge to consume both meats and vegetables (it is omnivorous). This lure will appear as a Mysterious Plant. If the player approaches the displayed lure, the worm will emerge and attack. During this time the main body of the worm resides underground.

Below is the number of hits it takes with each weapon to kill Depth Worms when playing with characters with a default damage modifier. The Weather Pain is not included due to the random nature of its projectile.

A worm chasing Woodie while underground. 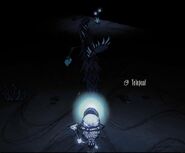 A worm during the Nightmare Phase.

A Depths Worm retreating into the ground.

A poster from the Six Feet Under update featuring a Depths Worm.

A Depths Worm, as seen in the Six Feet Under trailer.
Français
Community content is available under CC-BY-SA unless otherwise noted.
Advertisement