“It's getting late. It will be dark soon.”

“Night is coming. I need fire!”

“The scary time is coming soon.”

“Darkness will be here soon. I must prepare.”

“Night will be here soon.”

“It's almost my bedtime.”

“It'll be dark soon. Charlie will be waking up.”

“The sun is setting. Darkness waits nearby.”

“Darkness will be here soon!”

“It be gettin' late. Dark be on th'horizon.”

“NOW IS DARK'NING TIME OF NIGHT”

“Getting dark. But I can stay up past my bedtime.”

A full day in-game lasts for 8 real-time minutes by default (split into sixteen 30-second segments). After this time, the day counter will increase. The day consists of 3 phases: Day, Dusk and Night.

The Day phase is the brightest and is represented by the yellow segments of the clock in the top-right corner of the screen. The Day phase is generally the safest phase of the day and also the time when most Animals are active. Most Monsters, like Spiders and Spider Warriors, sleep during the Day. Neutral and passive mobs, including Pigmen, roam outside their houses until dusk. Merms, an aggressive mob, are less active during the Day phase, and this is the only time Red Mushrooms sprout up to be picked. Crops in Farms are only grown in daylight.

The Dusk phase is shown by red segments on the clock and is the part of the day when the sun is setting and the world becomes darker, although a light source is not yet required. At Dusk, Bees, Butterflies, Frogs, Gobblers, Pigs/Bores, Ballphins, Rabbits, and Tallbirds all return to their homes until morning. Spiders and Mosquitoes become active at this time while Beefalo move closer together as a herd. Merms are much more active at Dusk than any other phase. Bunnymen will also come out of their houses during this phase and stay out until daybreak. Pigs who are trapped outside at Dusk will panic and run around searching for light. The temperature begins to drop as well, and Green Mushrooms sprout to be picked. Dusk drains an average character's Sanity by 5/minute. If harvested, Mandrakes will dance around and mock the player as well as follow until the break of dawn. Elder Mandrakes will also be active and stay out until dawn.

The Night phase is represented by dark blue segments on the clock. When Night falls, the world quickly becomes completely dark and a light source is necessary. Most neutral and passive mobs still outside go to sleep on the spot. Redbirds, Snowbirds, and Crows who do not take flight before night comes settle down to sleep. Most aggressive mobs continue to be active at night. A light source is required during this phase not only to see, but also because Charlie will attack in complete darkness. Also, in total darkness, the character cannot interact with anything (they can still place Campfires and Fire Pits down, provided they aren't obstructed by terrain), and Sanity drains at a rate of 50/minute. While close to an active light source, sanity drains at 5/minute. Night is the coldest phase and the time when Blue Mushrooms, the rarest of the three mushrooms and a potent healing item, may be picked.

Surface mobs not listed here have the same behavior throughout the day, despite the phase.

Note: This section relates to Sandbox/Survival mode only.

The amount of daylight varies throughout the game. In mid-Summer (starting around Day 3) the Day phase is more than half of the total clock, while Night lasts only 2 segments. In Winter, Night is about 1/3 of the clock and Dusk nearly half. One complete cycle of the seasons lasts 36 days; 20 Summer and 16 Winter. Below is a chart showing the amount of each phase throughout the seasons:

Caves have a unique Day-Night Cycle. Time doesn't pass the same as it does on the surface, but there's still a Day-Night cycle. The only way to tell which phase the Day-Night Cycle is at is from the natural shafts of light, and mushrooms that are pickable. The lighted area becomes more narrow with each phase until darkness engulfs the area at night. The player still loses sanity as if it were night despite the phase. Mob activity during the phases is the same as on the surface. Naturally, Seasons do not impact caves with day length (as there is no day) or temperature. Players who are freezing from the cold warm up as soon as they go underground.

Trees, Saplings, Grass, and Berry Bushes grow as they do on the surface, but the player is blind to the passage of time while underground. Crops will only grow if they are near a light source, though they can still grow with the help of fertilizer.

The Ruins have their own cycle called the Nightmare Cycle, with a full one being much longer than a Day-Night Cycle on the surface. As with Caves, the Ruins are still considered as being in permanent night, and mob activity abides to the night phase.

The phases in the Nightmare Cycle are signaled by the Ancient Statues, Nightmare Lights, Splumonkeys, and Runic Turf changing appearance and behavior, among other things.

In the Reign of Giants DLC, The number of segments per phase changes drastically from the vanilla game depending on season. Also, during the full moon, the moon will give enough light to walk around. When it rains on the Surface World, it rains inside the Caves as well. Caves can now only partially protect the player from overheating/freezing.

In the Shipwrecked DLC, the number of segments per phase differs a lot from vanilla game and Reign of Giants. Full moon effects are also present.

In the Hamlet DLC, when being in any interior, there is no loss of sanity in the Dusk or Night phase. The full moon effect is also present. 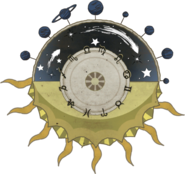