“I dreamed it myself!”

“Dreams come to a point. A sharp one.”

“I CAN HACK THIS WORLD”

“Dark fuel forged into a fascinating weapon! Its military applications are endless!”

“Are you seeing this too?”

“Well if this doesn't say adventure, I don't know what does.”

“Not too keen on touching that.”

“To slash and stab!”

“It made of spooky stuff, florp.”

The Dark Sword is a Magical Melee Weapon. It requires a Shadow Manipulator to prototype and costs 5 Nightmare Fuel and 1 Living Log to craft. The Dark Sword does 68 damage per hit and has 100 uses. It also drains Sanity by 20

/minute while equipped. It is one of Maxwell's starting items in the singleplayer game.

The Dark Sword is the strongest melee weapon in the game in terms of reliable, player-dealt damage. It can be used against any Mob in the game, not just against Shadow Creatures. Due to their perks, the Dark Sword proves the most useful when wielded by Wolfgang, Maxwell, and Wigfrid. 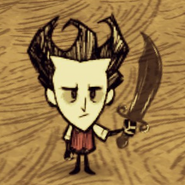 The Dark Sword when left on the ground.
Retrieved from "https://dontstarve.fandom.com/wiki/Dark_Sword?oldid=448861"
Community content is available under CC-BY-SA unless otherwise noted.