"A civilized patch of dirt."

Cultivated Turf is a craftable Turf Item exclusive to the Hamlet DLC. It requires 1 Rainforest Turf and 1 Ashes to craft and an Alchemy Engine to prototype. Like other Turfs, it can be placed on any bare ground tile or used as fuel.

It also spawns naturally in the Cultivated Biome.

When placed on the Surface World covering a large enough area, Redbirds and Crows are the only Birds that will spawn and land on these turfs.

In the Shipwrecked DLC, this Turf will not spawn Puddles. Expanding Puddles can still flood this turf, however. 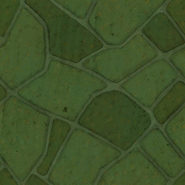 Cultivated Turf as seen on the Map.
Tiếng Việt
Community content is available under CC-BY-SA unless otherwise noted.
Advertisement