View source
watch 02:46
The Quarry - The Loop
Do you like this video?
Play Sound

“It makes me hungry just to look at it.”

“I could put food in it and fire underneath it.”

“I CAN REFINE MEATS AND VEGETABLES INTO MORE ROBUST FORMS”

“It looks derelict when it's not cooking something.”

“It seems a waste to just leave it sitting there, empty.”

“In need of ingredients.”

“Food goes in, other food comes out.”

“My kind of cooking... Just dump everything in and wait!”

“IT MOCKS WILBA WITH EMPTINESS”

“Meals are typically better if they contain food.”

“Wish there was food inside, flurp.”

“Sure wish there was food in it.”

“I guess I'll just... find some seeds to eat or something.”

The Crock Pot is a Structure that is used to cook a variety of belly-filling dishes from basic Foods. It's found on the Food Tab, it requires a Science Machine to prototype, and it costs 3 Cut Stone, 6 Charcoal, and 6 Twigs to build.

Building a Crock Pot early on greatly enhances food's value and efficiency, and it can even make use of otherwise inedible items like Twigs.

A Crock Pot has 4 slots for ingredients, each of which must be filled with a piece of Food for it to start cooking. Most recipes take 10–20 seconds to cook. (Exact times for each recipe are listed below.) Completed Crock Pot dishes can be stacked to 40, and none of them can be used in the Crock Pot again.

A cooking attempt's ingredients have to match a recipe. There are 58 recipes available for the Crock Pot, including those from Don't Starve Together & the DLC. If an attempt fails to match any recipe at all, Wet Goop ends up being the product.

When a recipe is attempted (i.e. the pot starts cooking), the food groups the ingredients fit into are considered. Almost all recipes are listed as requiring some amount of Food from certain food groups, but there are a lot of recipes with specific Food requirements (like the Froggle Bunwich).

Lots of ingredients fulfill recipe requirements more readily than others (e.g. 1 Drumstick has the same effect on a dish as 2 Morsels). More filling ingredients tend to have greater food values.

Each recipe has weight, so that a result can be decided when a set of ingredients fits more than one valid recipe. These weights are called recipe priorities.

There are 9 recognised food groups when cooking with a Crock Pot:

Some Foods do not fall into any of these groups (e.g. Butterfly Wings). Some fall into multiple (e.g. Fish). Some might count as a meat, fruit, or vegetable when fed to a Pig but not when used in a Crock Pot.

The following items can be used in a Crock Pot:

Any Meat (raw or cooked)

Any Monster Food (raw or cooked)

Any Fish or Seafood

Any Egg (raw or cooked)

Any Fruit (raw or cooked)

Any Vegetable (raw or cooked)

Although the following items are edible, they cannot be used in any Crock Pot dishes:

Birchnut (applies only to raw; roasted can be used in crock pot)

Eye of the Tiger Shark

The following recipes do not work with any cooked foods:

The following recipes do not work with specific cooked foods (i.e. Turkey Dinner requires raw Drumsticks but the other meat component can be cooked.):

An ingredient is "filler" if it can be added to a partially prepared recipe without changing the Crock Pot's output. Most recipes call for less than four ingredients, so fillers need to be added to fill the pot.

When filler is called for, most valid ingredients (see above) will usually work, though some recipes explicitly prohibit a couple ingredients or food groups. For example, Dragonpie cannot have any Meat ingredients in it.

Twigs can fill a lot of dishes, but a lot of recipes prohibit their use. One dish, Kabobs, actually requires them. Using them when possible is efficient, as Twigs are usually easier to get than Food.

If two or more Monster Foods are used in the pot, the crock pot produces Monster Lasagna unless Twigs are added (which makes Wet Goop) or higher priority food is available. As such, only one Monster Food should ever be attempted as filler for a dish.

The following is Monster Food:

These "food values" measure of how plentifully an ingredient can fulfill a recipe's need for certain food groups. Combined ingredients' food values (in addition to recipe priority) are what determine an attempt's final dish. For example, Honey Ham requires a meat value greater than or equal to 2.0, so in addition to Honey its ingredients can be 3 Jerky; 2 Jerky & 1 filler; or 1 Jerky and 2 Drumsticks; but 1 Jerky, 1 Drumstick, & 1 filler won't cut it.

The overall set of food values for an attempted dish is the sum of its component ingredient's values. In attempting a dish like

, the component values are:

Those are added up, and the final dish's set of value will 3.0 meat, 1.0 monster, 0.5 fruit. this would result in meaty stew

Foods with meat value of 0.5

Foods with meat value of 1.0

Fish & seafood come in three levels of fishiness: half, full, and double.

Foods with fish value of 0.5

Foods with fish value of 1.0

Food with fish value of 2.0

Foods with fruit value of 0.5

Foods with fruit value of 1.0

Durian counts as monster food as well as a full fruit.

Foods with vegetable value of 0.5

Foods with vegetable value of 1.0

Foods with egg value of 1.0

Foods with egg value of 4.0

Foods with sweetener value of 1.0

Food with sweetener value of 3.0

Foods with dairy value of 1.0

Bugs are unique to the Don't Starve: Hamlet DLC.

Foods with bug value of 1.0

Decorations are a unique food category in Don't Starve Together. It contains foods that are wild cards and typically only used in one recipe.

Foods with decoration value of 1.0: Forget-me-lots

Recipes' priority ratings are used to determine the result of an ingredient set decides the result of a particular cooking session based on the ingredients used. The recipe with the highest rating will always be chosen. If there are several valid recipes with the same priority, a random one of those specific recipes will be chosen. Some recipes have priority of 0 or below, which means they will never be chosen over recipes of positive priority. One such recipe is Wet Goop, which is in fact always a valid result, but it's never chosen over anything else because it has -2 priority.

If there is more than one recipe with highest priority the game will pick at random. Here is a final example; a dish that uses

as ingredients fulfills four different recipes: Fishsticks (10), Fish Tacos (10), Kabobs (5), and Froggle Bunwich (1). Two dishes tie, so the result 50% of the time is Fishsticks, and the other 50% it's Fish Tacos.

Recipes for the Crock Pot

The following is a list of Crock Pot recipes. There are also recipes exclusive to the Portable Crock Pot, not listed here.

A calculator to show what dishes can be made from given ingredients can be found here.

Under Ingredients, icons with a numeric value (like 1.0) represent any ingredient from that food group. Icons without values are specific ingredients. Required ingredients are the minimum food items to make a dish, and attempting to fill a dish with restricted ingredients would lead to a different dish.

In DLCs, items left in the Crock Pot will start to spoil before they are collected, and they spoil even quicker if it is raining. Some existing recipes gain the ability to warm or cool the player and new recipes have been added which can lower or raise the player's temperature. The Crock Pot itself also generates heat when cooking, which can possibly Overheat the player during Summer and Dry Season.

If a regular or RoG save file has been set to be compatible with SW, any recipes added by SW will also be available in such a file. Consequently, recipes such as Surf 'n' Turf can be created to easily restore large amounts of Health and Sanity in the Ruins by combining 2 Monster Meats with 2 Eels.

The Hamlet DLC introduces the first Crock Pot recipe that turns into a different recipe when it has spoiled. Tea will spoil after one day, but instead of becoming Rot it will become Iced Tea. Even though this transformation likely represents the cooling of the hot drink, putting Tea in an Ice Box will slow its spoilage like any other food item. Foliages can be used in the Crock Pot in this DLC.

A Crock Pot in action.

A Crock Pot with Meatballs in it, ready to be obtained. 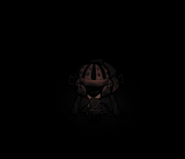 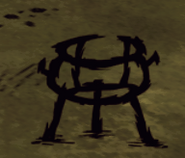 A burnt Crock Pot from the Reign of Giants DLC.

Webber and Wickerbottom cooking Pierogi in a Crock Pot in an artwork make by Klei Entertainment for the Lunar New Year.

A summer-themed drawing from Rhymes With Play #201 featuring Winona using the Crock Pot.