"CUNT_HAIRY DICK"
THis is a sheep... and its useless af

The Crafty trait adds the adjective "Crafty" to the Critter's name. 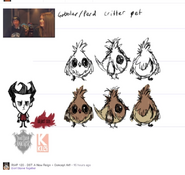 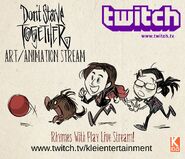 A drawing of all Critters except the Kittykit from Art Stream # 4.
Add a photo to this gallery
Retrieved from "https://dontstarve.fandom.com/wiki/Critters?oldid=378960"
Community content is available under CC-BY-SA unless otherwise noted.