“EVIDENCE OF A SEA CALAMITY”

“Perhaps I could pry it open.”

“It requires some kind of smashing device to open.”

“I hope a rations shipment lies within.”

“Wood friends made a box!”

“Not your typical treasure chest, but it works.”

Crates are naturally spawning structures introduced in the Shipwrecked DLC. They are occasionally found in the Beach Biome. They can be Hammered to yield one random Item in addition to one Board. Crates have their own Map icon, allowing them to be easily found later.

The possible random items and their respective chances are as follows: 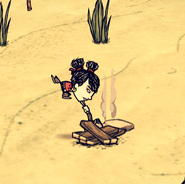 Crates as seen on the Map.
Retrieved from "https://dontstarve.fandom.com/wiki/Crate?oldid=455512"
Community content is available under CC-BY-SA unless otherwise noted.