"Harness the power of sonar."

“Ugh. I can still smell the jerkiness.”

“Peers into the darkness.”

“I WEAR THIS SKULL AS PART OF MY VICTORY!!”

“Rather clever use of echolocation”

“UNEASY LIES THE HEAD THAT WEARS THE FLYING RAT.”

The Cowl is a craftable Hat Item exclusive to the Hamlet DLC. It is found in the Light Tab, requires two Pig Skins, a Batilisk Wing and a Compass to craft, and an Alchemy Engine to prototype.

It provides the player a sonar-based night vision when worn. Every 5 seconds, it will produce some sonar waves, which will illuminate the player's screen with black-light (very similar to the Moggles), that will allow the player to see the entire screen for a short time. Then, over these 5 seconds, this light will progressively fade away, acting just like it was truly sound-based. Unlike Moggles, this item cannot be refueled, so the player will have to craft a new one once it runs out of durability.

During Humid Season, when worn, fog will not slow down the player, similar in function to the Pith Hat. It also allows the player to wear something in their chest slot, and not suffer the slowing effect. 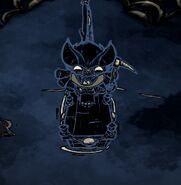