“The coral's formed a reef!”

“The coral grows to escape the sea.”

“Ripe for the picking.”

“This could likely support a wide array of life.”

“A colorful collection of Cnidaria.”

“What a pretty coral reef.”

“Really goes out of its way to be an obstacle, doesn't it?”

When mined with a Pickaxe, Coral Reefs drop 2-4 pieces of Coral total. After being mined, they can be Hammered to drop 1-3 Limestones and a Coral Larva. If the rock is not hammered, the Coral will fully grow back after 12 Days. It has a heavily increased grow rate during rain, similar to Mushrooms. It is also possible to replant Coral Reefs using Coral Nubbins.

The Coral Reef is a Biome in the Shipwrecked DLC. It is characterized by a multi colored texture on the terrain, and often contain large rocks covered in Coral. Brainy Sprouts may also be found less commonly, which may be picked for Brainy Matter. Ballphin Palaces are also found in Coral Reefs. The Yaarctopus may be found in this Biome and often plenty of Shoals are around.

A coral reef biome with its inhabitants. 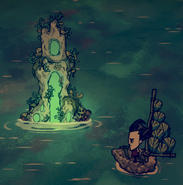 A inhabited Ballphin Palace at Dusk. 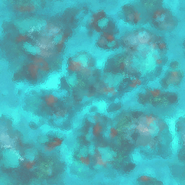