Don't Starve Wiki
Register
Don't have an account?
Sign In
Advertisement
in: Mobs, Return of Them, Neutral Creatures,
and 4 more
English

Edit
watch 02:58
No Man's Sky Update - The Loop
Do you like this video?
Play Sound

“Their faces are twisted with hunger.”

“Its eyes seem fixed to my raft.”

“That thing's hankering for a bite of my boat!”

“It seeks tö make a meal öf my vessel!”

“Could I interest you in something other than my boat?”

“Well, aren't you a funny fellow!”

“They're smiling! Wait, I think I was looking at them upside-down.”

“Oooh those things give me the shivers.”

The Cookie Cutter is a Mob exclusive to Don't Starve Together, introduced in Return of Them. They can be found in the Ocean around Salt Formations. They drop Monster Meat and occasionally Cookie Cutter Shells when killed.

They slowly swim up to Boats, jump on it and drill a hole in 3 seconds, resulting in a boat leak that drains 1

They are neutral towards the player. If attacked, they will fight back, delaying the drilling process during the time of the fight. If they are killed before the end of the drilling, no leak is formed.

After drilling they go back into the water and stay neutral for 30 seconds. They take 90 seconds to respawn.

It is possible to dispatch Cookie Cutters without risking damage to one's boat by luring them away from the Salt Formations and into deeper water where they will drop out of sight and no longer pose a threat. 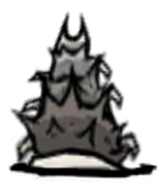 A Cookie Cutter as depicted in the Salty Dog update trailer.

A Cookie Cutter attacking in the Salty Dog update trailer.

A Cookie Cutter featured in a promotional image for the Don't Starve Together QOL update.

A Cookie Cutter alongside the Malbatross as seen in a drawing from Art Stream # 89. 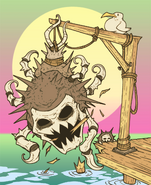 A pair of Cookie Cutters as seen in a drawing from Art Stream # 91.
Tiếng Việt 中文
Community content is available under CC-BY-SA unless otherwise noted.
Advertisement