“Just when I thought I couldn't get any better.”

“I feel my mind open when I wear it.”

“What is this thing?”

“A flash of brilliance!”

“I swear I don't normally need this.”

“A facilitator for the breaking of the laws of conservation!”

“This necklace is a creative force. I'm feelin' it.”

“Wearin' this ol'amulet makes me feel so smart!”

“We could be good friends, you and I.”

“So I'll be more skilled when I rebuild.”

While having it equipped in the chest slot, crafting items requires half the materials they would normally consume, rounded up. It degrades by 20% each time an item is crafted. It will also provide the player with a passive +2

Since Green Gems are not renewable only a limited number of Construction Amulets can be crafted.

In the Reign of Giants DLC, players have a 0.02% chance of finding Green Gems inside Tumbleweeds, thus making Construction Amulets renewable.

In Don't Starve Together, the Dragonfly can be farmed in order to get Green Gems which allow you to make unlimited Construction Amulets. Green Gems can also be gathered in the Caves from Cave Holes by using The Lazy Forager.

When crafting with the Construction Amulet equipped, an icon appears next to the "Build" button. 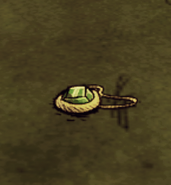 A Construction Amulet dropped on the ground.

1 of 22
Retrieved from "https://dontstarve.fandom.com/wiki/Construction_Amulet?oldid=454037"
Community content is available under CC-BY-SA unless otherwise noted.