Shows the direction the map is rotated.
Shows the location of other players carrying a compass.

“Which way am I facing?”

“Theoretically, it is attracted to the magnetic poles of this world.”

“A reading cannöt be gleaned.”

“How do I use this thing again?”

“For when up is down and down is out.”

“There spinny needle inside!”

“The Pinetree Pioneer handbook says to always bring a compass!”

The Compass is an item found in the Survival crafting tab, and requires a Science Machine to prototype, and 1 Gold Nugget and 1 Papyrus to craft.

Its function is to tell the orientation of the player when player is not using minimap. When examined, the player will state what direction they're facing (the camera is rotated with the E and Q buttons). The player will start out oriented Northeast.

This item is useless to Wes and Wilbur, since they cannot talk and thus cannot interact with the item.

In Don't Starve Together, the Compass is equipped in the hand slot and has a durability of 2.5 days. It is crafted using Flint instead of Papyrus, and does not require a Science Machine to prototype. Additionally, a small compass icon opens up above the hand slot showing the player the direction they are facing. However, during Full Moons, the handle will spin instead of showing a consistent direction. When the player's sanity is below 33%, the compass will begin to turn in a direction by an exponential amount of degrees that relates to the player's sanity. Between 33% and 20%, the compass will spin a set 90 degrees (the compass will turn from west to east, and then from east to west if the player is facing north).

Equipping a Compass will also reveal the location of other players that have a Compass equipped, even in unexplored areas. This can be very helpful, especially when playing in Wilderness Mode. The compass is also used to craft the Ocuvigil and the Cartographer's Desk. 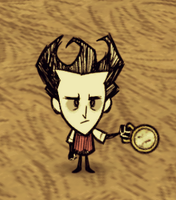 Wilson with a compass equipped in Don't Starve Together. 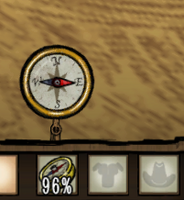 The compass icon that appears when equipped in Don't Starve Together.

Compass as seen in the poster for the East or West, Base is Best update.
Русский
Community content is available under CC-BY-SA unless otherwise noted.
Advertisement