Can Only be used by Maxwell
Unlock Shadow Tab

“Maybe you could teach me some magic tricks? I'm a quick learner!”

The Codex Umbra was discovered by William Carter in August of 1904. At the time, William was aboard a train heading to San Francisco, California from New York City.[1] The train crashed into a broken down circus wagon, and a man of William's description was reported missing but assumed dead.[2] However, William survived the crash with only a few injuries. While wandering across the desert, he discovered an ancient codex and was intrigued by the "terrifying" possibilities it offered.[3]

Months later, William established himself in San Francisco and began going by the name of Maxwell. Maxwell updated his act to incorporate dark manifestations that he taught himself to summon from the Codex Umbra.[4] He found great success in this new act and eventually hired an assistant, Charlie.[5] During their last performance, Maxwell's act went normally until he attempted to pull "shadows incarnate" from the Codex and was instead pulled into the book by giant shadow hands. Soon, the entire act ends in disaster as both Maxwell and Charlie are violently dragged into a parallel dimension.[6] 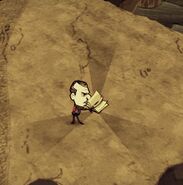 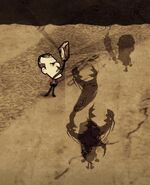