“Is no match for my mighty chest!”

“It looks like it could break apart at any moment.”

“The gears are spilling out.”

“The builders have left it in a state of abandonment.”

“I myself am not much of a chess player.”

“Stuck together with gears and sticky tape.”

“Get a load of this spalder.”

“Wow! It looks even more dangerous than the usual ones!”

The Damaged Rook is a pale, battered rook covered in Nightmare Fuel. It has same base stats as Clockwork Rook and drops always 1 Gears in addition to a 60% chance to drop Nightmare Fuel or 50% chance of dropping Thulecite. It occurs naturally in the Ruins, but also has a chance to spawn from Broken Clockworks when they are destroyed.

The player can spawn an allied Damaged Rook(or any other chess piece) by using 3 gears to repair a pile of Broken Clockworks. Even as allies, Damaged Rooks are very destructive and caution should be exercised when fighting enemies.

The Rook will raise its front leg and slam on the ground several times before charging at and ramming the player. It will also destroy anything that stands in between it and the player, including other clockwork pieces. This is useful, as Clockwork Rooks will often kill other chess pieces in a couple of hits. Their attacks can be used to destroy structures as well, similar to Deerclops and Krampus. When the Rook hits a Tree, Boulder or Beehive, for example, it will quickly demolish it and leave the resources behind. This can be useful for helping to get Marble from Marble Trees without a Pickaxe.

It is advisable to kill all Damaged Rooks in the vicinity of an Ancient Pseudoscience Station. The rooks can destroy even a perfect-condition Station in a single charge, resulting in the loss of a very rare resource. This will also summon the lightning strikes from the Station's destruction.

Below is the number of hits it takes with each weapon to kill Clockwork Rooks when playing with characters with a default damage modifier. The Weather Pain is not included due to the random nature of its projectile.

A Damaged Rook guarding some Broken Clockworks in the Ruins. 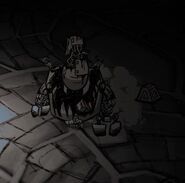 A Damaged Rook destroying an Ancient Statue in its path. 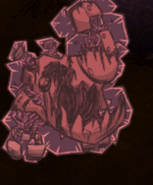 Damaged Rook, along with a Damaged Bishop and Damaged Knight, in the A Moderately Friendly Update artwork.
Retrieved from "https://dontstarve.fandom.com/wiki/Clockwork_Rook/Damaged?oldid=468269"
Community content is available under CC-BY-SA unless otherwise noted.