“It looks pretty worn down.”

“Another battle lost to time.”

“Its nightmare fueled surroundings have corrupted its programming.”

“Doesn't look to be in the best of shape.”

“It looks beyond repair.”

“I would very much like to see its insides.”

“STUFF BAD DREAMS ARE MADE ON”

“Reminds me of the broken down merry-go-round I saw once.”

A Damaged Knight is a pale, battered knight covered in Nightmare Fuel. It has same base stats as the Clockwork Knight and drops 1 Gears, plus has a chance to also drop Nightmare Fuel and/or Thulecite Fragments. It occurs naturally in the Ruins, but also has a chance to spawn from Broken Clockworks when they are destroyed.

The player can spawn an allied Damaged Knight (or any other chess piece) by using 3 Gears to repair a pile of Broken Clockworks.

Befriending at least 5 Pigs can easily kill all the Knights and other Clockwork Monsters around the Wooden Thing. Alternatively, the attacks of the Clockwork Rook will damage them. With a bit of timing and luck, a Rook can be used to destroy the other Clockwork Monsters. When trying to kill a Knight for its Gears, a death by fire will cause it to drop Ashes. 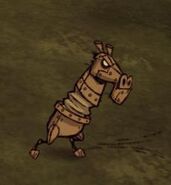 A Damaged Knight found guarding an Ancient Pseudoscience Station in the Ruins.

Damaged Knight, along with a Damaged Bishop and Damaged Rook, in the A Moderately Friendly Update artwork.

Wilson with a friendly Damaged Knight, as seen in the A Moderately Friendly Update trailer.
Retrieved from "https://dontstarve.fandom.com/wiki/Clockwork_Knight/Damaged?oldid=434450"
Community content is available under CC-BY-SA unless otherwise noted.