Chili Flakes can be added to Crock Pot dishes in a Portable Seasoning Station. Seasoned dishes gain the adjective Spicy before their names. After eating a seasoned dish, the player deals 20% more damage during half a day, or 4 minutes, and their temperature increases by 40° for 15 seconds.

Eating multiple dishes seasoned with Chili Flakes does not stack the effect, but resets the cooldown period. 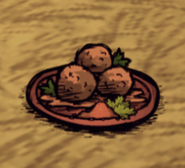 Dishes seasoned with Chili Flakes appear with a plate on the ground.
Retrieved from "https://dontstarve.fandom.com/wiki/Chili_Flakes?oldid=463820"
Community content is available under CC-BY-SA unless otherwise noted.