The entrance to a small cave

“A den of bloodsuckers.”

“The maw of death itself.”

“The natural habitat of a the Mammalian Hematophagous.”

“Don't look none too inviting.”

“Based on its depth and malodorous smell, I deduce this hole houses bats.”

“I don't get good vibes from that place.”

“Not the best place to hide, I think.”

“WHERE THE BAT SUCKS”

“Those bats are wasting their time in a cave when they should be outside flying.”

The Cave Cleft is a naturally spawning Structure exclusive to Hamlet DLC.

Within, only a single room is able to be explored unlike Ancient Pig Ruins and Mant Hills. The room is dark with the exception of some light near the exit during Day and Dusk.

Upon entering a Cave Cleft, the player will find some structures such as Stalagmites and Unimportant Pillars which can be mined with a Pickaxe or Opulent Pickaxe. One can also find some Fern on the ground, and sometimes Flint. At the center of the room, a Spooky Hole will be found.

Only one Cave Cleft per world will lead to another area. After the player is flown to the fourth island by the BFB, the cave entrance from that island will lead to an exit blocked by a Stone Plug. Mining this Plug will unlock the exit, which leads to a random Cave Cleft on any of the other 4 islands. This entrance does not have to be re-mined in order to travel through it again.

It is possible to find one or more Vampire Bat(s) sleeping inside. They will remain asleep unless intentionally woken up either by attacking it or from being hit with debris from a cave-in.

While inside a Cave Cleft, the character loses no Sanity because of the darkness.

Concept art of the Cave Cleft from Rhymes With Play #237. 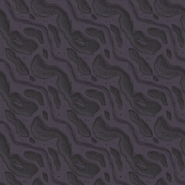 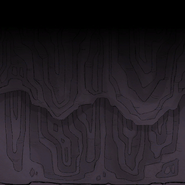