Don't Starve Wiki
Register
Don't have an account?
Sign In
Advertisement
in: Mobs, Items, Return of Them, Passive Creatures
English

Disguises itself as a planted Carrot.

Can be "murdered" for

“Are carrots supposed to have legs?”

“Leggy carrot is getting away!”

“I despise how it skitters...”

“THIS CARROT IS MORE IRRITATING THAN MOST”

“My, another plant and animal hybrid. How odd.”

“That carrot is revolting!”

“Vegetables are nöt tö be trusted!”

“Does it have a soul, one wonders?”

“Vegetables are much more interesting here than back home.”

The Carrat is a Mob exclusive to Don't Starve Together, introduced in Return of Them. It is found in the Lunar Forest Biome on the Lunar Island. It can also fall from Earthquake in the Lunar Grotto.

It first takes on the appearance of an unpicked Carrot and reveals itself upon being picked. A Carrat can be obtained in the Inventory either by catching it with a Trap or by using a Shovel on the planted form, which will stun it for a short while and allow it to be picked up. 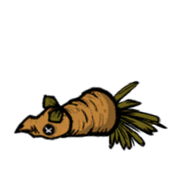 Concept art for the Carrat from Rhymes With Play #244. 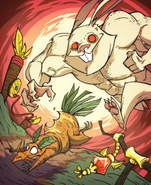 A Carrat in a Carrat Race being chased by a Bunnyman as seen in a drawing from Art Stream # 101.
Tiếng Việt
Community content is available under CC-BY-SA unless otherwise noted.
Advertisement