“Combustion at its finest.”

“Anyone know a good sea shanty 'side me?”

“It'll last me the night, hopefully.”

A Campfire is a key to basic survival in the world. It provides Light, Heat and allows Food to be cooked.

It requires 3 Cut Grass and 2 Logs to create and is available from the beginning of the game. It is cheaper than a Fire Pit in terms of resources, but also less efficient, as it can not be re-lit. The fuel will burn twice as fast, it is more susceptible to Rain, and in a sense, it is less safe, as it may set nearby flammable objects on fire. When burnt out, the Campfire drops 1 Ash.

Generally, campfires are built when lacking resources to make a Fire Pit or when camping in a location that is not meant to be permanent, e.g. wandering away from the main base once it is established.

Once built, the Campfire lasts 2 minutes and 15 seconds unless more fuel is added. Additional fuel increases fire duration linearly up to a maximum of 4.5 minutes while heat and light emitted goes up in four discrete steps: 70 / 120 / 180 / 220 degrees and 2 / 3 / 4 / 5 units of distance, respectively. The different stages can be observed by the growing flames and by examining the fire.

Adding too much fuel to a Campfire can cause nearby Trees, Grass, Saplings, or any other flammable objects to catch fire, which can start large forest fires in a Forest biome. This danger can be averted by building away from other flammable objects or opting for the Fire Pit. During Winter, Campfires provide enough warmth to keep a character alive without any additional clothing, provided that the character stays nearby and keeps adding fuel.

It is handy to have one ready at all times just in case you can't get home in time.

In rain, a campfire may burn its fuel up to 250% faster (depending on precipitation rate).

“I could watch it for hours.”

“A flame to keep the horrors at bay.”

“It ignites at the mere introduction of fuel!”

“To warm my fingers and roast sausages.”

“Need ta be careful ta not burn me legs.”

A Fire Pit is the center of most base camps. It provides light and heat, allows food to be cooked, and is a contained, 'safer' fire than a Campfire (it will not set surrounding objects on fire).

It requires 2 Logs and 12 Rocks to craft and, like the Campfire, is available from the beginning of the game. It is a persistent structure, unlike Campfires, and can be re-lit by putting fuel in it. A Fire Pit is also more efficient than a Campfire, as the fuel will last 2 times longer, and it is less susceptible to Rain. It drops no Ashes when it burns out, but destroying it will.

Fire Pits provide a great deal of light and heat to the surrounding area. Once placed, they cannot be moved unless destroyed by a Hammer or Deconstruction Staff; however, they can be re-lit with any acceptable fuel.

Once built, the Fire Pit lasts 3 minutes unless more fuel is added. Additional fuel increases fire duration linearly up to a maximum of 6 minutes while heat and light emitted goes up in four discrete steps: 70 / 120 / 180 / 220 degrees and 2 / 3 / 4 / 5 units of distance, respectively. The different stages can be observed through the size of the flames and left-click feedback.

Fire Pits also show up as an icon on the Map. Like the campfire, Fire Pits provide enough warmth during Winter to keep the player alive without any additional clothing, provided that they stay nearby. If the character sleeps the night, the fire will be out when they awake the next day.

In rain, a Fire Pit may burn its fuel up to 200% faster (depending on precipitation rate).

A Campfire at maximum fuel, setting aflame nearby Trees.

Wilson standing near a Fire Pit.

A Fire Pit at maximum fuel.

A low Fire Pit in Winter.

An "Add Fuel" option appears when holding a burnable item over a Campfire and Fire Pit. 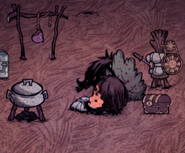 A Hound in front of the Fire Pit but behind the fire.

Fire Pit icon on a Map, layered above other icons.

A Fire Pit as it appears in the Screecher.

Retrieved from "https://dontstarve.fandom.com/wiki/Campfire?oldid=442631"
Community content is available under CC-BY-SA unless otherwise noted.