“Spines! My weakness! How did you know?”

“It's got more things coming out of it than we do.”

“It's fine if you just leave it alone.”

“I bet it has a sharp flavor.”

“Ye have a sharp taste ye do.”

“IT BE POINTY FOODS”

“It's almost like it doesn't want to be eaten.”

“It full of spikes.”

“I wonder if it's really worth the bother.”

A Cactus is a form of flora from the Reign of Giants DLC found only in the Desert biome. Cactus Flesh can be harvested from the Cactus at the cost of 6 Health. Wearing armor will decrease the amount of damage taken. When harvested it will drop Cactus Flesh during any season, but only in Summer will it drop its Flower.

Cacti cannot be dug up with a Shovel. The player will have to wait for them to regrow in 4 (3 during Spring) days to be able to harvest them again. Unlike most other plants, Cacti can grow back during winter, unaffected by the cold. Therefore, Cactus Flesh can be easily farmed and used in lieu of farmed vegetables during Winter.

A New Reign for Don't Starve Together adds a different type of Cacti to the game. Apart from their appearance, they do not differ from the original version. Both types co-exist in regular worlds: The Oasis Cactus only appears in the Desert containing the Oasis and the Antlion, while the original one can be found in the Desert containing the Dragonfly Set Piece and Hound Mounds.

Cactus in the game files. 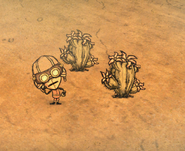 WX-78 standing next to some Oasis Cacti.