Can be planted as Flower

“IT THINKS IT IS SO PRETTY”

“I never trusted those things, eh?”

“Strange that I haven't yet seen any caterpillars.”

“Look at it, flitting around happily.”

“What a pretty pattern!”

“Your aerial dance is so soothing to behold...”

“Pretty as a sunset o'er th'water.”

“A friend for friends”

“It's more a flutterer than a flyer.”

“It has no work or responsibilities. Poor thing.”

The Butterfly is a passive Mob commonly found in Grassland biomes. They spawn from Flowers (including Evil Flowers) and will slowly fly around, often landing on other Flowers within 30 metres. At dusk, they will attempt to land on a Flower to despawn. Butterflies do not spawn during Winter or in Caves.

Butterflies can be caught with Bug Net. As inventory items, they can be used to plant Flowers, which can spawn additional Butterflies or improve the production of Honey in Bee Boxes. In all DLCs, Butterflies inside the player's inventory will starve in 2 days unless fed. They can be fed with anything edible to the player, like carrot, however, butterfly only has 1 HP, so food like rot will kill the butterflies instead of feeding their hunger.

A Butterfly spawns once about every 15 seconds from a flower located between 6 metres and 25 metres away from the player. It will not spawn if there are 4 Butterflies within 64 metres of the player.

A moving Butterfly may be chased down and killed with melee by pressing force-attack button (Ctrl+F). The butterfly actual position can be better determined through its shadow. Movement speed and faster attack speed, compared to punch, with Walking Cane will help.

When caught using a Bug Net, a live Butterfly will become an item in the player's inventory (stacks to 20). With the Bug Net equipped, pressing the Spacebar automatically chases and catches Butterflies rather than picking nearby Flowers.

Butterflies die in one hit from any weapon. Butterflies take one blast from the Ice Staff to be frozen and cannot be put to sleep.

A flower can be planted in the middle of base. The flower in a communal base will spawn butterfly faster, scaling with the number of players in base, since there are multiple players around to contribute to butterfly's spawn rate. The butterflies can be killed by an aggressive Abigail, or a player camping beside the flower. Having more flowers is counterproductive as they randomise the possible spawning spot for butterfly.

A flower can be planted near Beefalo herds. Beefaloes will attack any Butterflies that spawn from Flowers during their mating season. Any items that the Butterflies drop can be safely collected while wearing a Beefalo Hat.

A flower can be planted near Magma

. The spawning butterflies will die due to the fire damage.

A flower can be planted around an Elephant Cactus

. The spawning butterflies will be killed by the Elephant Cactus. However, players will need to wear a Cactus Armor to be able to harvest the drops safely.

In the Shipwrecked DLC, Butterflies are blue but otherwise act the same. Butterflies do not spawn during Hurricane Season.

In the Hamlet DLC, Butterflies will not spawn during Humid Season. 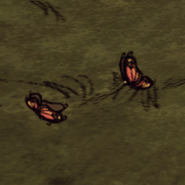 A Butterfly resting on a Flower. 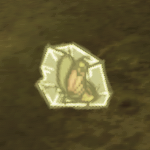 A Butterfly as seen in the Shipwrecked DLC.

A dead Butterfly in the Shipwrecked DLC.