"Part and parcel to bundling your stuff."

Can be used to store 4 stacks of items.

“Wrapping things up should make them easier to carry.”

“We could hide some gross things, I guess.”

“Is for hiding goodies.”

“FOR WRAPPING THINGS IN BUNDLES”

“I guess we could wrap a few things up.”

“The consolidation of rope and paper makes for good wrapping.”

“Let's cocoon something for later!”

“Wrapped up extra tight so it'll fit in my pocket.”

“We could wrap stuff up for later.”

“Efficient packing is truly an overlooked art in camping.”

“It'll keep my things safe from the ravages of time.”

The Bundling Wrap is a Survival Tab Item that can only be prototyped by using its Blueprint. It requires 1 Wax Paper and 1 Rope to craft, and is used to access 4 storage slots that can be wrapped up to create Bundled Supplies holding any items placed within.

Its Blueprint has a 4% chance to drop from a killed Bee or Killer Bee. Several items cannot be put inside Bundled Supplies, such as itself and Chester's Eye Bone. Since Honeycomb is not renewable in the single-player Don't Starve, only a limited number of Bundling Wrap can be crafted per world.

Can be unwrapped to retrieve items.

"bundle" (will be empty)

“Our supplies are in there!”

“Now I can burn a bunch of things in one go!”

“Is little surprise inside, maybe.”

“I don't even remember what's within anymore...”

“At least someone's bundled up out here.”

“Amazing! The weight of the items inside are reduced when bundled together!”

“That's one of my favorite things!”

“That oughta keep everything nice and fresh.”

“Does a nice surprise await inside?”

“It's packed full of provisions.”

“Bundled up for quick and efficient carrying.”

Bundled Supplies are created by wrapping up to 4 stacks of items with a Bundling Wrap. It can be stored in Chests, Backpacks or the player's Inventory. Its appearance changes based on the number of storage slots used when wrapping items, regardless of the size of the stack in any slot or the type of item placed inside. Food items can be stored inside Bundled Supplies indefinitely without spoiling, providing a great deal of utility for survival. Unwrapping it will cause all the items stored inside to drop on ground, in addition to 1 Wax Paper.

In the Shipwrecked DLC, the Fishbone cannot be put inside Bundled Supplies.

In the Hamlet DLC, its blueprint is dropped by the Queen Womant instead since Bees and Killer Bees are unavailable. Ro Bin Gizzard Stone cannot be put inside Bundled Supplies.

"Part and parcel to bundling your stuff."

Can be used to store 4 stacks of items.

In Don't Starve Together, prototyping the Bundling Wrap requires a Rare Blueprint that is dropped by the Bee Queen and rarely, Klaus instead. Star-Sky, the Stag Antler, and the Ancient Key cannot be put inside Bundled Supplies.

Bundling Wrap as seen in the poster for the Herd Mentality update. 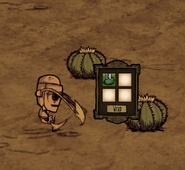