Bridges are rare tiles that spawn over the ocean, forming long narrow strips of land that connect larger landmasses. The turfs underneath cannot be moved with a Pitchfork.

Bridges connected rounded islands in the older versions of the worlds in Don't Starve. They are less common in the newer versions when the rougher map generation was introduced, though they can still be found in Caves and in certain levels of Adventure Mode.

Bridges in new versions usually appear whenever a Road or Trail has generated itself near the ocean.

A small bridge appearing at the edge of the ocean.

A small bridge connecting two pieces of the island. 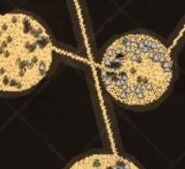 Bridges on a Map.
Retrieved from "https://dontstarve.fandom.com/wiki/Bridge?oldid=447681"
Community content is available under CC-BY-SA unless otherwise noted.