Can be befriended with Fishes.
Has a chance to resurrect a drowning player when allied.

“Such a round, rubbery fellow.”

“Come and fight with me, sea-friends!”

“What a chipper little fellow. Does he know life has no meaning?”

“STOP BEING FRIENDLY. IT'S REPELLANT”

“What an adorable cetacean!”

“Hey buddy, you know any tricks?”

“They're much craftier than they appear at first glance.”

“Theoretically they can be manipulated with food.”

“These devil's really have a ball.”

Bottlenose Ballphins are Mobs found in the Shipwrecked DLC. They only spawn in the Ocean, and can usually be found swimming next to their Ballphin Palace. When killed, a Ballphin drops two Fish Morsels, a Dorsal Fin, and has a 50% chance to drop an additional Empty Bottle.

Bottlenose Ballphins are considered innocent creatures, and killing one will add 2 points of Naughtiness, which can summon Krampus (although this cannot occur while riding on a Boat).

Bottlenose Ballphins generally stay in a single area near a Ballphin Palace during the Day. However, if a Player character ventures near, they will follow them for a relatively short distance, and perform back-flips.

While Pigs are afraid of the darkness, Bottlenose Ballphins are instead afraid of Lightning. Any Lightning strike will send every nearby Ballphin into a panic for a short time, either swimming back and forth while screaming, or crowding the nearest source of light if there are any available. This can make it challenging for the Player to keep hired Ballphins pacified during the heavy lightning storms of Hurricane Season.

Similar to a Life Jacket, befriended Bottlenose Ballphins have an 80% chance of saving the player from drowning, resurrecting them to the nearest island with ingredients to make a Log Raft. There is also a very small chance that a Bottlenose Ballphin will spawn to assist the Player whenever a Crocodog wave hits.

Bottlenose Ballphins will have random names assigned to them, similar to Pigs, Bunnymen, and Wildbores.

Below is the number of hits it takes with each weapon to kill a Bottlenose Ballphin when playing with characters with a default damage modifier. The Weather Pain is not included due to the random nature of its projectile. 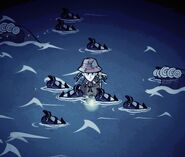 A group of sleeping Bottlenose Ballphins at night.

Three Bottlenose Ballphins, as seen in the Shipwrecked trailer. 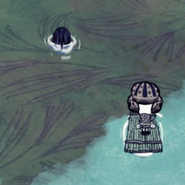 An example of a Bottlenose Ballphin pushed or spawned on land.

Bottlenose Ballphin as seen in the poster for the Home Sea Home update.

As seen on Swimming Horror Trailer