“It's not the most exciting weapon.”

“Death returns to the sender.”

“It is a flat aerofoil.”

“That looks hard to throw.”

“Beats getting your hands dirty.”

“The unbalanced aerodynamic forces acting upon it create an eliptical airborne path.”

“They say if you love something, you should let it go.”

“Oh good. I have separation anxiety.”

“I prefer somethin' thet don't come back at me head.”

“If you love something set it free. If it comes back it's probably a boomerang.”

“It's great at comebacks. Ha!”

“What goes around comes around, they say, they say!”

The Boomerang is a craftable Ranged Weapon. It requires 1 Boards, 1 Silk, and 1 Charcoal to craft and an Alchemy Engine to prototype.

The Boomerang returns to the player after being thrown. The player must catch it by holding down the action key (default Space key) while it is on its way back. If it isn't caught after being thrown, it will hit the player, causing damage and losing twice the durability on return, and the player will have to pick it up from the ground in order to use it again. 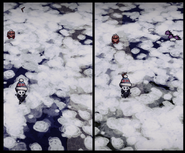 Boomerang as seen in the poster for the Progress! update.
Retrieved from "https://dontstarve.fandom.com/wiki/Boomerang?oldid=453598"
Community content is available under CC-BY-SA unless otherwise noted.