“That whale has emotional issues.”

“I didn't know they even made fish that big.”

“It looks sad. Maybe it too knows life has no meaning.”

“I do love marine mammals!”

“I can safely assume that was the animal making those bubbles.”

“I will end yöur möping, giant!”

“Why the long fishface?”

A Blue Whale is a neutral Ocean animal that spawns after the player has tracked it down by examining Suspicious Bubbles. Blue Whales can't swim into the Shallow Ocean and will turn away from its borders if approaching it. They are considered innocent creatures, and killing one adds 7 points to the player's naughtiness level, which can cause Krampus to appear. Blue Whales cannot be set on fire.

After it has been angered, the Blue Whale will attempt to close the distance between it and the attacker. A player can safely kite one with an attack pattern of 5-6 swings, depending on movement speed. However, if there is more than one Blue Whale on-screen then all of them will become aggressive towards the attacker until they are killed or outrun.

By investigating Suspicious Bubbles, one can find a Blue Whale. These can be found randomly in the deep ocean biome. Functioning identically to the Koalefant's Suspicious Dirt Pile, these bubbles will change locations if ignored for a period of time. Once investigating Suspicious Bubbles three will pop in the same direction, if followed it will lead to another Suspicious Bubbles or the Blue Whale approximately two screens away. Upon uncovering the final bubble (there can be between 6 and 12 per hunt), the character will alert the player that the creature is close and a Blue Whale will be spawned rather than another bubble. Note that there is a chance of up to 33% that a White Whale will spawn instead, based on the number of days survived.

Slain Blue Whales don't immediately drop items, instead becoming a carcass when killed. The carcass will go through 3 stages: Bloated stage 1 (recently killed, withered, and rotting), bloated stage 2 (larger, emits more smell), and bloating stage 3 (severely deformed, shaking softly). During stages 2 and 3, the Blue Whale Carcass will create a squeaking sound that can be heard from about 8 boat lengths away. The Blue Whale Carcass will take 3-5 days to fully bloat (only if it has been loaded once during that play session). When bloated, it can be popped with a Machete and it will explode, dropping 4 Raw Fish, 4 Blubber, and 9 other random items.

There is a tricky problem post-hunting: picking up all the items dropped may turn out to be difficult. The dropped Raw Fish are highly possible to trigger Sea Hound/Crocodog spawning. Player may be overwhelmed by a large amount of these monsters, and cannot pick up the raw fish and blubber before the monsters eating all of them, making all the effort paid on hunting in vain. A possible way to solve this problem is preparing Sea Wall before popping the bloated carcass. Encircle the area so that spawned monsters cannot get close. After picking up the rewards safely, one may break out of the wall, fight the monsters or simply leave if fighting is not desired. 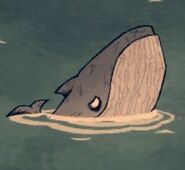 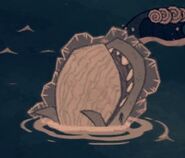 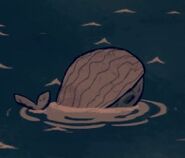 Blue Whale carcass about to explode. 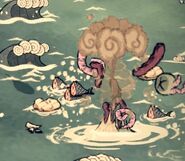 A Blue Whale as seen in a promotional screenshot for Shipwrecked.