“Is home for birdies.”

“Few of us can see our cages.”

“I WILL IMPRISON THE FLESHLINGS.”

“This will safely contain one avian specimen.”

“Where I try to make birds reform their evil ways.”

“You'll never get me behind bars again.”

“An intricate enclosure for scrutinizing the local wildlife.”

“I need to get a birdy buddy.”

“Suitable lodgings for a feathered beast.”

“I know how it feels to be grounded.”

“A place where little birds are penned.”

The Birdcage is a craftable Structure that allows the imprisonment of Birds (Redbirds, Crows, and Snowbirds). It requires 6 Gold Nuggets, 2 Papyrus, and 2 Seeds to craft and an Alchemy Engine to prototype.

A Birdcage can only house one bird; however, it can be easily swapped with another at any time. As of yet, there is no functional difference between the three types of birds, other than the aesthetic appeal. Birds go to sleep at night and wake up in the morning or when offered an item. If offered an item, once the bird is done reacting to it (eating or refusing), it will go back to sleep.

Feeding a bird in a Birdcage a raw Fruit or Vegetable (except Berries, Mushrooms, Lichen, Cave Banana, Banana, Seaweed, and Mandrake) will make it drop 1–2 Crop Seeds of the same type, as well as having a 50% chance to drop an additional regular Seed. These specialized seeds can be planted on a Farm plot, enabling selective crops. The player can also feed the bird regular Seeds to get fresh Seeds in return.

If fed any kind of Meats (excluding uncooked Monster Meat and raw Eggs) or meat-based food in Any state of spoilage, the bird will produce a fresh Egg. Eggs can be eaten raw or cooked, as well as used in Crock Pot recipes such as Bacon and Eggs and Pierogi. Eggs can also be offered to the Pig King in exchange for Gold Nuggets.

In Don't Starve Together, feeding Seeds to the bird has a 33% chance to spawn Guano, and will not yield Seeds. Therefore, it can no longer be used for freshening stale Seeds without some loss of Seeds.

Additionally, birds will slowly starve in the Birdcage, lasting 2.33-4.4 Days before dying, depending on season. Once the bird has died, the cage must be mucked out before a new bird is caged. Similar to dying in inventory or chest, a bird dying in a Birdcage will be changed into a Morsel, which will be fresh at the moment the bird dies, and will spoil at its normal spoiling rate. Leaving the dead bird in the birdcage will eventually turn it into a skeleton, mucking out which will yield one Rot. Unlike starving in inventory or being killed, a caged bird will never yield its Feather.

Examining the Birdcage when the captured bird is hungry or starving will make the character say different Quotes, and the hungry bird will have an additional animation, allowing the player to know when the bird needs to be fed. Any item the bird can eat (Seeds, Fruits, Vegetables, or Meat) will restore full hunger value to the bird.

Crow imprisoned in a Birdcage.

Snowbird imprisoned in a Birdcage. 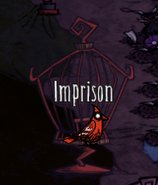 "Imprison" option when holding a bird over an empty Birdcage.

A sleeping Snowbird in a Birdcage. 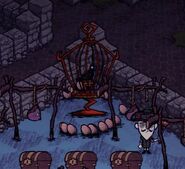 A Crow with several eggs.

An easter egg in vanilla Don't Starve where placing a bird in a birdcage may result in it having a small pirate hat.

A recently deceased Crow in Don't Starve Together.

The skeleton of an unknown bird in Don't Starve Together.

"Muck Out Birdcage" option when holding a mouse over a Birdcage with a deceased bird inside in Don't Starve Together.